U.S. Transportation Secretary Pete Buttigieg visited North Texas Wednesday and got to see some of the things the infrastructure bill will be used for.

DALLAS - U.S. Transportation Secretary Pete Buttigieg visited North Texas Wednesday and got to see some of the things the infrastructure bill will be used for.

Under the infrastructure bill, Texas would get upwards of $30 billion to put towards broadband, public transportation, and highways and bridge improvement projects.

Transportation Secretary Buttigieg said a formula is being used to divvy up the funds.

There's a lot riding on the $1.2 trillion infrastructure bill passed by the U.S. Senate Tuesday.

During a stop in North Texas Wednesday, Secretary Buttigieg said if the bill clears Congress and is signed into law, Texas would receive $30 billion over five years.

"The answers don't need to come from Washington, more of the money does, which is what we're doing with this bill," Buttigieg said.

Part of the money will help fund public transportation, expanding train and bus service in the area. 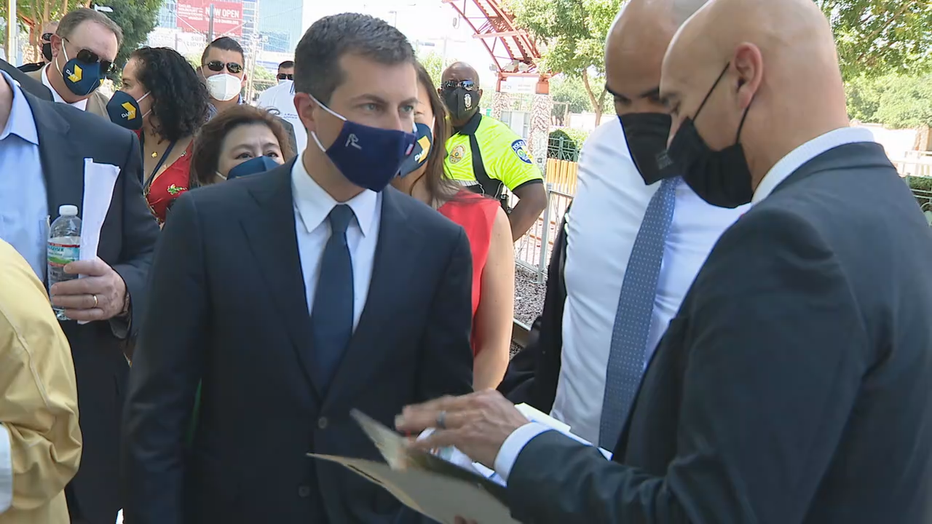 Funds will also go to DFW Airport, one of the busiest in the nation.

"We are now 13th in the world when it comes to our infrastructure. We get a C- in terms of our grade for infrastructure," U.S. Representative Colin Allred said.

Part of the expansion of DFW Airport includes prefabricated modular gates, a first at any airport.

Once complete, the 450-ton structures will be moved across the airfield and installed at Terminal C.

"We need this investment to get folks back to work and allow us to recover," Allred added.

"There's a tendency to look at a lot of these projects as almost jobs projects, and that's just wrong," SMU economist Mike Davis.

Davis is skeptical of the costly infrastructure bill.

"The most important thing to worry about is spending. We have record levels of debt in this country right now. We're talking about accumulating a whole lot more. And then we put this infrastructure spending on top of that," he explained. "So, the question for these infrastructure projects is not, how many people will be hired? The question is, do we need the infrastructure and is it worth the money?"

RELATED: John Cornyn, Ted Cruz vote against infrastructure bill that could give Texas more than $30 billion

Buttigieg said his office will have a transparent, accountable, and purposeful way of getting these funds out.

Congressman Allred said North Texas is one of the fastest growing regions in the country and infrastructure projects are long overdue.

"Our growth is not going to go down, it’s going to accelerate," Allred added.

The House was set to stay on recess until September 20, but Tuesday evening, the House Majority Leader said the chamber would return August 23 to consider the infrastructure bill.