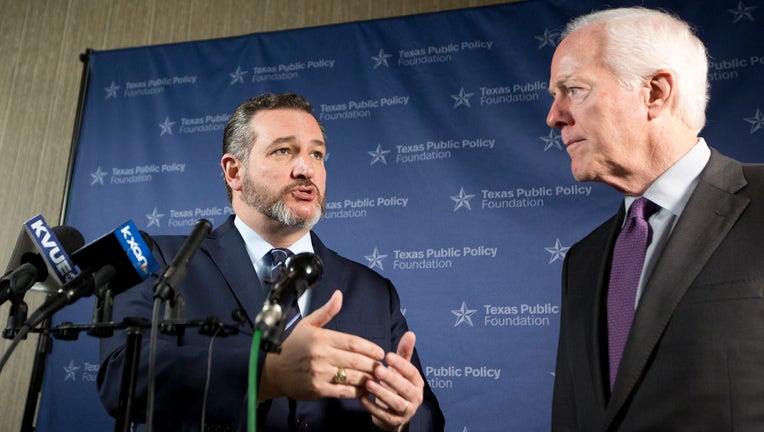 WASHINGTON - The U.S. Senate passed a rare bipartisan initiative Tuesday that would deploy at least $30 billion across the state to repair bridges, build roads and increase broadband internet access, without the support of either senator from Texas.

The Infrastructure Investment and Jobs Act, with a $1.2 trillion price tag, had bipartisan support, but both Republican U.S. Sens. John Cornyn and Ted Cruz opposed the sweeping legislation. The U.S. House is expected to pass the bill, and Biden is likely to sign the bill once it reaches his desk. Overall, it passed the chamber by a 69-30 vote. All Senate Democrats backed the bill, along with 19 Republicans.

Cornyn praised aspects of the bill throughout the negotiations before ultimately voting against it, breaking with Senate Minority Leader Mitch McConnell, whom he is usually in lockstep with. Cornyn cited the bill’s costs and the process by which it passed through the Senate as the reasons for his opposition.

"There’s no doubt the nation’s transportation and digital infrastructure need improvements, and Texas stands to benefit once this bill becomes law," he said in a statement. But, while he "kept an open mind throughout the process" he voted against it.

"It isn’t paid for, will add too much to the debt, and was rushed through the Senate in a week’s time without adequate debate or input," he said.

"This is reckless. And it’s unprecedented. … This is a trap," he said on the Senate floor Thursday. "Listen, for Democrats it’s what they campaigned on. If you’re a Democrat, you want to raise taxes and raise spending. You want more debt from China. That’s what Democrats do."

The bill catalogued more than 2,700 pages of policies. Texas is set to receive at least $27 billion for roads, more than $500 million to repair bridges, $3 billion for public transportation, $408 million for electric car charging stations and $100 million for broadband internet, according to a White House fact sheet.

It remains unclear how much of those funds could be directed to Texas, whose main power grid experienced catastrophic and prolonged outages during a winter storm in February.

A key priority for President Joe Biden’s administration, the bill passed its toughest hurdle — the U.S. Senate — thanks to bipartisan negotiations involving the president’s team and a group of 20 senators from both parties.

Local Texas leaders closely monitored the progress of the bill from afar.

"I’m cautiously optimistic," Parker said in a Thursday interview ahead of passage.

The explosion of Texas’ population growth underscores the stakes involved with this bill.

"We’re the second-fastest-growing city in the country," Parker said. "It’s no secret that we have high growth and a need for world-class infrastructure."

Texas mayoral elections aren’t partisan. But the support for the bill was bipartisan across the North Texas region, as Dallas Mayor Eric Johnson, a Democrat, tweeted his support earlier this week.

The Congressional Budget Office projects that while the bill is expected to cost about $1 trillion, it will add about $256 billion to the federal deficit over the next 10 years. Neither party is immune to deficit-spending proposals: Both Cruz and Cornyn voted for massive tax cuts in 2017 that were projected at the time to add about $1 trillion to the national deficit.

The Senate passage is only the first step in both the legislative process and the yearslong process of pairing the money with actual projects.

Many of the provisions in the bill were written with climate change in mind. For instance, $12 billion will be allocated nationally toward flood mitigation, a key concern for Houstonians still rebuilding from Hurricane Harvey.

Even so, many liberals were disappointed that the bill did not go far enough in dealing with the climate crisis. As such, Democrats are expected to push an additional spending bill that could cost $3.5 trillion and will more directly address the environment and other Democratic policies, including expanding Medicare.

Cornyn told reporters Thursday that if Democrats pursue this track, they will be without Republican support.

"If they do that, they’ll have to do that themselves," Cornyn said.

Former President Donald Trump unsuccessfully attempted to pass an infrastructure bill, and this legislation’s bipartisan support is a rare moment of legislative consensus after years of Congressional deadlock. Trump opposed this infrastructure bill.

"This is not an infrastructure bill, this is the beginning of the Green New Deal. The bill I proposed, which Mitch McConnell couldn’t do anything with, was pure infrastructure. I want what is best for America, not what’s best for the Communist Democrat Party," Trump said in a Sunday statement. "This will be a big victory for the Democrats and will be used against Republicans in the upcoming elections. ... Hopefully the House will be much stronger than the Senate."