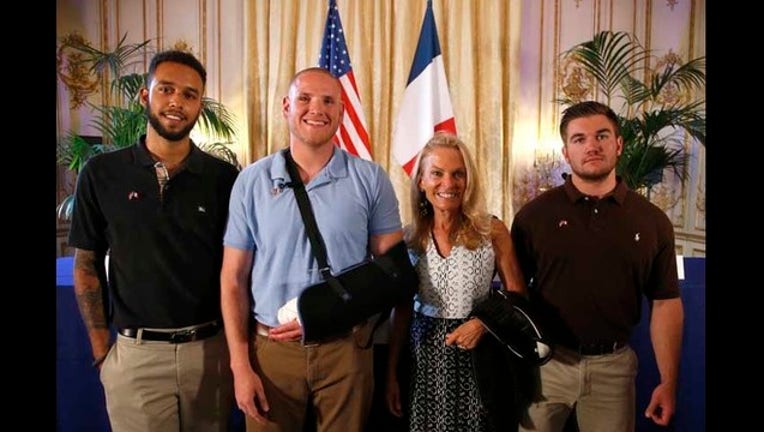 SACRAMENTO, Calif. (AP) — The U.S. airman hailed as a hero for helping thwart a European terror attack was released from the hospital where he had been for a week following an unrelated stabbing, officials said Thursday.

U.S. Air Force Airman Spencer Stone was knifed three times in the torso on Oct. 8 in a fight near a bar in Sacramento, California.

"Thanks, also, to my amazing family and friends for their love and support," he said in the statement. "And, thanks to everyone who has sent encouragement during this challenging time. I'm focused now on healing and recovering and look forward to the next part of my journey."

The brawl occurred shortly after Stone, 23, left a nightclub where patrons applauded him for helping tackle a gunman with ties to radical Islam on a Paris-bound passenger train in August. Police say the assault had nothing to do with the European terror plot.

Grainy surveillance video from outside a liquor store shows a large man who appears to be Stone fighting a half dozen people at an intersection. No arrests have been made.

On behalf of his family, Stone's mother, Joyce Eskel, also thanked his care team and the well-wishers who expressed concern and support for her son.

"We've been overwhelmed by the support from our family and friends, the Sacramento area, the Air Force, and people around the world. Thank you all," she said in the statement.