PLANO, Texas - Police believe speed may have been a factor in a crash that killed three teenagers in Plano early Monday morning.

The crash happened just before 3:45 a.m., in the 3200 block of Hedgcoxe Road, between Coit and Independence

It shut down the road for several hours.

The road was back open by the afternoon, but there are still signs of where the crash happened.

Police said by the time they got to the accident, they found three teenagers already dead.

“I’ve never seen anything like this,” said Vivek Saran, who lives nearby.

It was the middle of the night when neighbors were jolted awake by a sudden crash.

“It was loud enough to get me out of bed. It was a big boom,” Susan Staxen recalled.

Plano police said a 2019 orange BMW sedan may have been speeding, coming around a bend, before hitting a curb, sending it flying. 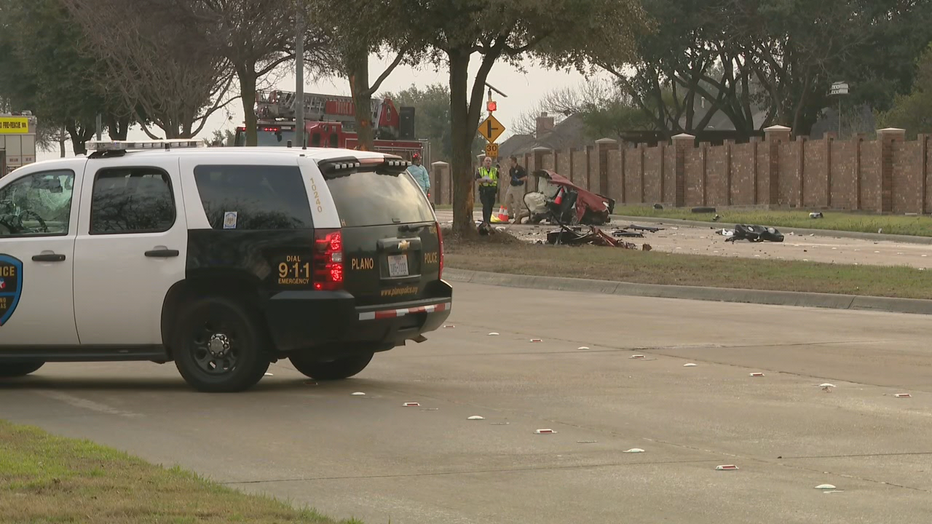 “Travelled quite a distance, and we believe the driver was trying to regain control of the vehicle,” said Plano PD Officer David Tilley. “Unfortunately, crossed back over, struck a tree in the median. At that point, spun around and then struck a secondary tree pretty much in the center of the car.”

The impact was so strong, it split the car in two. The BMW then burst into flames and several pieces ended up on a neighbor’s property.

“I saw flames shooting up from whatever it was. I couldn’t tell if it was a car or what it was because there were so many flames. They were probably at least five feet tall,” Staxen added.

Police have not determined if anything besides speed may have played a role in this crash. Police also haven’t said how fast the car was going.

"Our Plano ISD family joins with Plano Senior High and Plano West Senior High in mourning the lives lost over the weekend, including two currently enrolled students and a former student. We extend our sincere condolences to the students’ families, and to our students and staff members affected by this tragedy. Additional counselors and other administrative staff will be onsite at the campuses and will make themselves available for as long as they are needed to support students and staff during this difficult time."