The other video is a body cam from a nearby officer whose vehicle blocked the crash scene. She was able to warn fellow officers her vehicle was about to get hit. She then ran to check on the 28-year-old driver who police say later admits to having three or more beers. 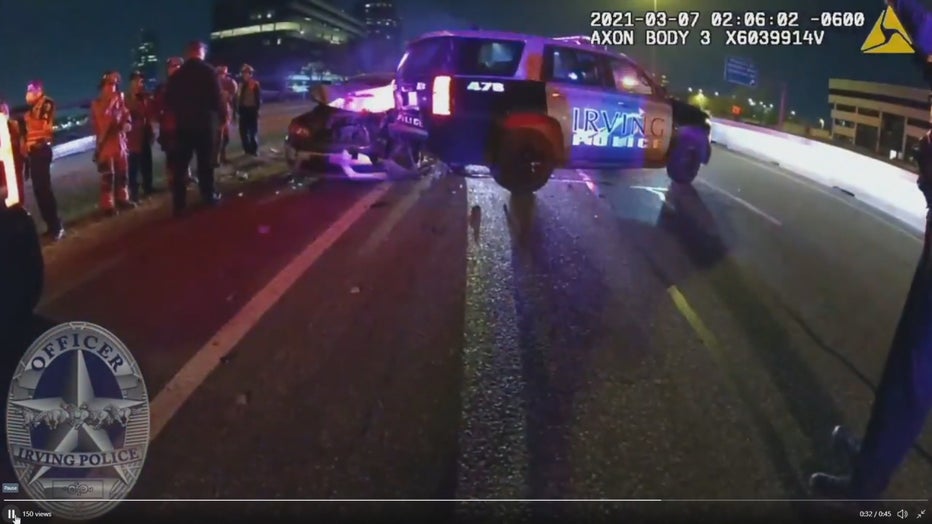 "We could tell that the person was possibly under the influence of alcohol and called for a DWI officer to head to that location," said Irving Police Officer Robert Reeves.

The scene unfolded on westbound State Highway 114 between Rochelle and O’Connor Road about 1:45 a.m. Sunday.

Fortunately, police say none of the officers were injured.

"We are never going to win that crash right," Reeves said. "So if we get hit and we are not able to see those cars coming, that’s almost always a fatality for the officer or first responder."

Last month, Dallas Police Officer Mitchell Penton was hit and killed by a suspected drunk driver as he directed traffic around a crash scene.

And Fort Worth police tweeted a reminder about the state’s move over law that requires drivers to move over or slow down when passing first responders on the side of the road.

Irving police say this is the forth incident in the last several months involving Irving first responders working crash scenes hit by impaired or distracted drivers.

They worry St. Patrick’s Day revelers and spring breakers could make their jobs even more dangerous.

"Twenty years into their career, they’ll be able to remember the time they almost got hit by a drunk driver," Reeves said. "Unfortunately, we all have those stories that we are able to remember throughout our career, and this will definitely be one that sticks with them forever."

Police encourage anyone out celebrating to arrange a ride home in advance or use a ride share.

As for the driver who hit the squad, he was taken to the hospital. An arrest warrant is waiting for him after release.