INDIANAPOLIS - After a gunman killed eight people and wounded several others before killing himself in a late-night shooting Thursday at a FedEx facility near the Indianapolis airport — the latest mass shooting on an already long list in 2021 after a lull during the COVID-19 pandemic — President Joe Biden called on Congress to act immediately on gun control legislation.

The Gun Violence Archive recorded 147 mass shootings and 11 mass murders this year alone, as the Biden administration ramps up its response to gun violence in America.

RELATED: Police: 8 killed in shooting at FedEx facility in Indianapolis

The Indianapolis shooting overnight was at least the third mass shooting this year in the city alone. Five people, including a pregnant woman, were shot and killed in January, and a man was accused of killing three adults and a child before abducting his daughter during an argument at a home in March.

Last week, Biden announced a half-dozen executive actions to combat what he called an "epidemic and an international embarrassment" of gun violence in America. But he said much more is needed. 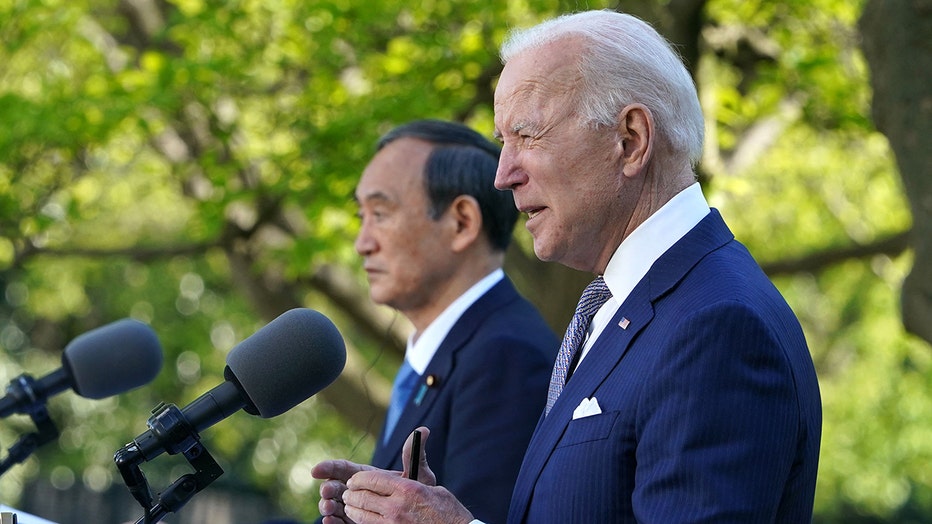 In Washington on Friday, Biden called on the Senate not to wait on bringing a House-passed gun control bill to the floor.

"Congress has to step up and act. The Senate has to act," Biden said. "I strongly, strongly urge my Republican friends and the Congress who refused to bring up the House-passed bill to bring it up now. This has to end. It’s a national embarrassment what’s going on."

Biden noted that no one has worked harder to deal with the violence by individuals using weapons than him."Who in God’s name needs a weapon that can hold 100 rounds, or 40 rounds or 20 rounds? It’s just wrong. I’m not going to give up until it’s done," Biden continued.

Indianapolis police said at least 8 people were shot and killed at a FedEx facility near the airport Thursday night and 'multiple' others have injuries.

Biden and Vice President Kamala Harris made written statements Friday morning after they were briefed on the Indianapolis shooting.

"Today’s briefing is just the latest in a string of tragedies, following closely after gunmen firing bullets in broad daylight at spas in and around Atlanta, Georgia, a grocery store in Boulder, Colorado, a home in Rock Hill, South Carolina, and so many other shootings," Biden said. "Gun violence is an epidemic in America. But we should not accept it. We must act."

Biden said he called on the Justice Department to better protect Americans from gun violence.

"I also urged Congress to hear the call of the American people – including the vast majority of gun owners – to enact commonsense gun violence prevention legislation, like universal background checks and a ban of weapons of war and high-capacity magazines," Biden continued in its statement. "Too many Americans are dying every single day from gun violence. It stains our character and pierces the very soul of our nation."

A mass shooting at a FedEx facility in Indianapolis late Thursday night has left at least eight people dead and several others injured, police say.

Harris also addressed the shooting overnight. "Yet again we have families in our country that are grieving the loss of their family members because of gun violence," she said. "There is no question that this violence must end, and we are thinking of the families that lost their loved ones."

House Speaker Nancy Pelosi said she was "horrified and heartbroken" by the shooting in Indianapolis and called for congressional action on gun control.

"As we pray for the families of all affected, we must work urgently to enact commonsense gun violence prevention laws to save lives & prevent this suffering," the Democratic leader said in a tweet.

In the wake of the shooting, FedEx pledged to reexamine some of its security policies and expressed sympathy for the families affected.

"We are deeply shocked and saddened by the loss of our team members following the tragic shooting at our FedEx Ground facility in Indianapolis," FedEx wrote in a statement about the shooting in Indiana. "Our most heartfelt sympathies are with all those affected by this senseless act of violence."

FedEx among latest mass shootings in 2021

In Atlanta, at least eight people were killed when a gunman opened fire on spa businesses on March 16. Seven of those slain were women and six were of Asian descent.

The suspected gunman, 21-year-old Robert Long, told investigators he has a "sex addiction" and said the massage parlor locations he targeted may have been "a temptation for him that he wanted to eliminate." Long also allegedly took "responsibility" for the shooting, authorities said.

Meanwhile, about one week later, on March 22, a shooter killed 10 people, including a police offer, inside a supermarket in Boulder, Colorado. According to the Associated Press, the suspect bought a firearm at a local gun store after passing a background check. Investigators are working to determine the motive for the shooting and why the suspect chose the King Soopers grocery store.

On March 31, a gunman killed four people and critically wounded a fifth at a Southern California office building. According to FOX 11 Los Angeles, police said that a gunman locked the gates surrounding the Unified Homes office building in the city of Orange, trapping the victims inside before going on a shooting rampage that left four people dead, including a 9-year-old boy.

A week later, on April 7, former NFL player Phillip Adams killed six people in South Carolina, including a prominent doctor, his wife and their two grandchildren.

York County Sheriff Kevin Tolson said investigators had not yet determined a motive in the shooting deaths of Dr. Robert Lesslie, 70, and his wife, Barbara, 69, along with their grandchildren Adah Lesslie, 9, and Noah Lesslie, 5.

"There's nothing right now that makes sense to any of us," Tolson said of the mass killing.

A man who had been working at the Lesslie home, James Lewis, 38, from Gaston, was found shot to death outside.