As thousands of Texas restaurants continue to take a hit during the COVID-19 pandemic, industry leaders are looking to elected officials to push for more money to help business owners keep their doors open.

As thousands of Texas restaurants continue to take a hit during the COVID-19 pandemic, industry leaders are looking to elected officials to push for more money to help business owners keep their doors open.

The Texas Restaurant Association (TRA) hosted a town hall with state lawmakers in Tarrant County to talk about how the industry can keep moving forward.

The TRA estimates more than 650,000 restaurant industry workers are now unemployed, and that number is only expected to grow.

Industry leaders say federal money has helped, but as for any help from the state, the next legislative session is still several months away.

“It’s either we turn around and we survive, or we’re going to have to shut our doors, unfortunately,” said David Long, who is the owner of Urban Eatz.

Business at Long’s restaurant has taken a hit since April and has yet to bounce back.

“Back in April, it was down 70 percent, it’s come up slightly since then but it’s starting to trend downwards again, and so at the moment, I’m still down 60-66 percent,” Long said. 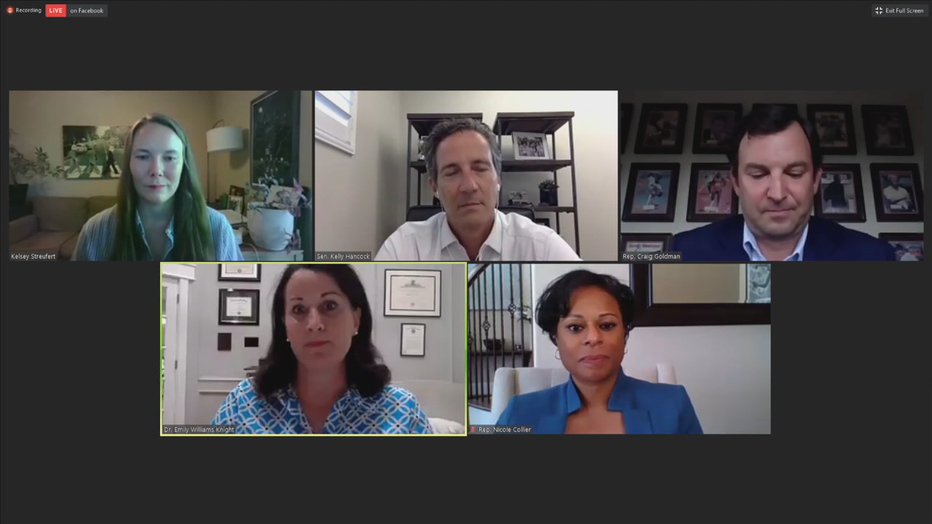 Long said he was lucky enough to get $75,000 through the Paycheck Protection Program, but that lifeline is almost up.

“That money’s going to run out soon. I’ll probably be out of money by the end of July,” he added.

Thousands more are in similar situations.

TRA officials said they asked for $390 million out of billions the state received in CARES Act dollars.

State Senator Kelly Hancock is directing businesses to their cities and counties for help.

“Your large cities, your large counties, all have millions of dollars that are designed to be distributed to businesses, so I wouldn’t do 100 percent toward the governor and the state,” he said.

Restrictions keeping many restaurants from making a profit

Despite the shutdowns and seating restrictions, some restaurant owners are hanging on. But they aren't sure how long they'll be able to do it. Anna Tauzin with the Texas Restaurant Association talks to Good Day about they way the organization is trying to help those in need.

“Expect the unexpected. Nothing is for sure, the likelihood, I can’t tell you, but I can tell you certainly there will be a number of bills written and I’ll be writing my own to try and help the industry, absolutely,” State Rep. Craig Goldman said.

But the state’s next legislative session isn’t until 2021.

State lawmakers warned businesses that we may be in this for a while.

“Trying to ignore where we’re at is not good, trying to think it’s going to be over in 30-60 days is not realistic, and so it’s coming up with new models of success,” Hancock said.

Many cities and counties are currently making decisions on how to distribute CARES Act funds.

Dallas County commissioners are expected to vote this week on adding another $30 million into an emergency business assistance program to help provide forgivable loans.