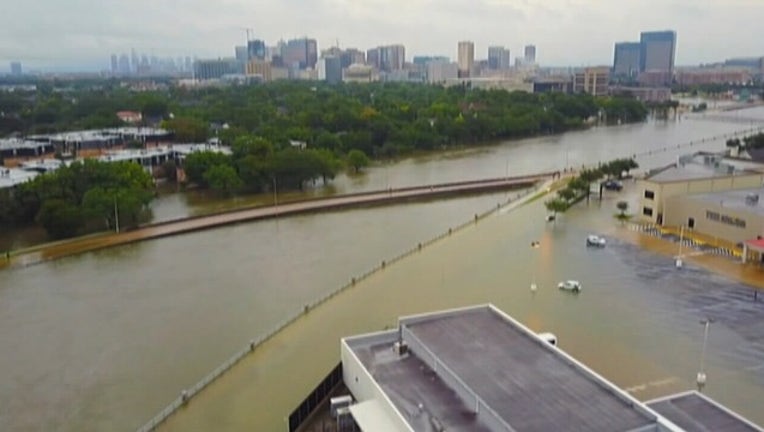 The phrase "climate change" also does not appear in the nearly 200-page report, except in footnotes that reference scientific papers.

But it is the latest government alarm that massive disasters such as Harvey will only continue. Last month, a White House report warned these types of disasters are worsening because of global warming, and citing numerous studies, said more than 90 percent of the current warming is caused by humans.

After releasing the new Texas report Thursday, Abbott wouldn't wade into whether he believed manmade global warming is causing the kind of disasters the state is telling residents to get used to.

"I'm not a scientist. Impossible for me to answer that question," he said.

The report was not commissioned as an assessment of climate change in Texas. Instead, it is the findings of a rebuilding task force Abbott created after Hurricane Harvey devastated the Texas coast, causing an estimated $125 billion in damage. At least 68 people directly died from Harvey's effects, and another 35 people died from indirect effects such as vehicle accidents, according to the report.

But in underscoring the inevitably of future disasters in Texas, the report notes rising sea levels and extreme downpours becoming more frequent in recent decades.

It also cites a "changing climate" while reinforcing the need to strengthen dams and levees.

"Flooding risks for coastal Texas, and much of the rest of the state, will continue to rise. The current scientific consensus points to increasing amounts of intense rainfall coupled with the likelihood of more intense hurricanes," the report read.

The report was spearheaded by Texas A&M University System Chancellor John Sharp, who Abbott appointed as a recovery czar after the storm. It urges state and local officials to think in "generational terms" to infrastructure planning so as to "future-proof" the Gulf Coast .

Sharp said there was no discussion about leaving the terms climate change or global warming out of the report. He, too, declined to weigh in on whether humans are causing climate change after helping Texas recover from Harvey for the past year.

"I don't know," Sharp said. "It looks like something's changing but I'm not sure I'm a good enough scientist to know what it is. I leave it in their hands."

John Anderson, a professor of oceanography at Rice University and expert on rising sea levels, said the report continues a trend of denials from Texas leaders.

"The tendency in the state of Texas has been to combat the changing climate without acknowledging the causes of climate change," he said. "The elephant in the room is getting bigger."

Abbott, who easily won re-election in November, has been noncommittal in his career about whether he thinks human activity is affecting the climate. Before becoming governor in 2015, Abbott repeatedly sued the federal government over environmental regulations as Texas' attorney general.

President Donald Trump and elected Republicans frequently say they can't tell how much of climate change is caused by humans and how much is natural.

Across the U.S. In the last two years alone, storms and natural disasters have killed scores of people, damaged or destroyed tens of thousands of homes and cost tens of billions of dollars. As the severity escalates, governors are finding they have to make disaster planning a priority or risk the consequences of inaction defining their terms and enraging voters.