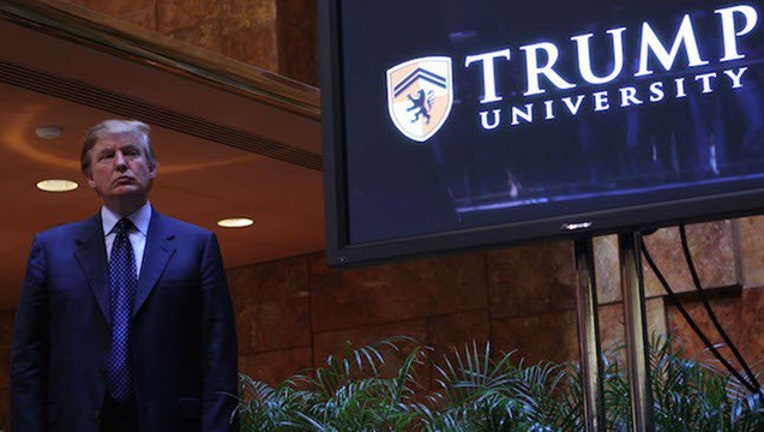 But internal emails reviewed by The Associated Press show the staff of then-State Attorney General Gregg Abbott weren't buying what Trump was selling. Abbott is now the state's Republican governor and a vocal Trump supporter.

"The consumers we have spoken with have expressed profound dissatisfaction with the Trump U course and materials," wrote Rick Berlin, an assistant attorney general with the state Consumer Protection Division, in a June 2010 email. "They believe they were lured to the seminar by false promises and the Trump name and that they have been ripped off."

The government emails, obtained through a public records request by the Democratic political action committee American Bridge and provided to the AP, underscores that Texas regulators thought Trump U was a scam using the lure of easy money to bilk unsophisticated students out of up to $35,000 in tuition and mentoring fees.

In his June 2010 exchange with a lawyer representing Trump, Berlin wrote that the promises made to the real-estate novices targeted by the company's marketing campaign were "virtually impossible to achieve." Trump University was also operating in Texas without a required business license, a criminal misdemeanor under state law, he said.

"In effect, Trump U promises to teach these novices everything they need to know to be a successful residential real estate broker — in 3 days," Berlin wrote, adding that in Texas it took 900 hours of classroom instruction and two years of selling experience to become a licensed real-estate broker.

"The extensive training is required for good reason: to protect the public," Berlin wrote.

In a media release Tuesday, Trump defended his namesake seminars as providing "a substantive, valuable education" and released thousands of one-page surveys in which those taking the classes praised the experience.

Trump's lawyers tried the same approach years ago with Berlin, who pointed out that the surveys were taken immediately at the end of the seminars, "before they have discovered that the information they received is essentially unusable and they will be unable to recoup their investment from the course, much less make a profit, as promised by Trump U."

Requests to interview Berlin on Tuesday were rebuffed by the office of Texas Attorney General Ken Paxton, a Republican.

A month before the 2010 exchange with Trump's lawyers, Berlin had authored a detailed memo to his bosses seeking permission to file a lawsuit against Trump and his business partners seeking more than $5.4 million in penalties and restitution to victims. He detailed at least nine separate state laws Trump U had potentially violated, including engaging in "false, misleading or deceptive acts."

Instead, Berlin was ordered to stand down. His supervisor at the time, former Deputy Chief of Consumer Protection John Owens, told the AP last week that the case was dropped for "political reasons."

"Gov. Abbott has never met Donald Trump, and in the governor's only phone conversation with him — after he entered the race for governor and three years after Trump U was forced out of Texas — they discussed efforts to defeat Wendy Davis," Hirsch said Tuesday, referring to the Democratic opponent Abbott defeated in 2014.

Owens, who is now retired and lives in Houston, said the decision to drop the case left dozens of former Trump U students "high and dry" to try to get their money back from the celebrity businessman.

"It had to be political in my mind because Donald Trump was treated differently than any other similarly situated scam artist in the 16 years I was at the consumer protection office," Owens told the AP on Friday.