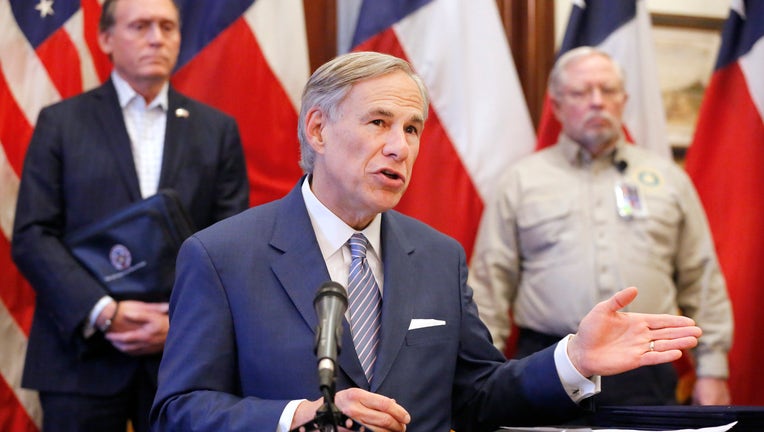 AUSTIN, TX - MARCH 29: Texas Governor Greg Abbott announced the US Army Corps of Engineers and the state are putting up a 250-bed field hospital at the Kay Bailey Hutchison Convention Center in downtown Dallas during a press conference at the Texas S (Photo by Tom Fox-Pool/Getty Images)

AUSTIN, Texas - Texas businesses won’t all reopen at the same time, Gov. Greg Abbott said Monday, even as President Donald Trump indicated he was itching to restore the nation’s economy battered by the coronavirus pandemic.

Abbott, a Republican, said he would provide more details this week of how he envisions Texas getting back to work, although he has set no timetable. He has issued what is effectively a stay-at-home order through the end of April, and officials in some of Texas’ biggest cities say they don’t expect the number of COVID-19 cases to peak until May.

“This isn’t going to be a rushing the gates, everyone is able to suddenly reopen all at once,” Abbott said from his office in the Texas Capitol.

Trump asserted Monday that it will be up to him to determine how and when to reopen the coronavirus-stricken country, though it is unclear what authority he has to overrule the states. Abbott said he spoke with Trump over the weekend and that the White House understands that “what may work for Nebraska may be different than what works for New York.”

Hours later, Houston Mayor Sylvester Turner said he was anxious to get things going again also, but that doing so too soon could make the situation worse.

“Patience is a virtue. Let’s do it in stages based on the facts, the science, the medical advice, and then we’ll move forward,” Turner said.

Abbott also hinted at a decision coming later this week on whether Texas schools will remain closed for the rest of the year. Classes statewide are suspended through May 4.

Financial tips for the COVID-19 pandemic

If you are struggling with finances during the pandemic, these tips may be helpful.

Turner said anyone in Houston can be tested for COVID-19, even if they don’t have apparent symptoms. The city’s two testing sites will soon be able to process 500 tests a day, he said.

At least 2,239 people in the city have tested positive as of Monday, and 18 have died.

“We need more testing throughout our city and especially in communities that have been in many cases overlooked on so many different fronts,” Turner said. “And we are nowhere close to that at this point.”

Texas Attorney General Ken Paxton said Monday that the decision would help to protect state residents. The American Civil Liberties Union of Texas, which brought the suit, did not immediately respond to a request for comment.

The Supreme Court has asked both parties to respond by the end of Monday.

Associated Press writers Nomaan Merchant in Houston and Jake Bleiberg in Dallas contributed to this report.