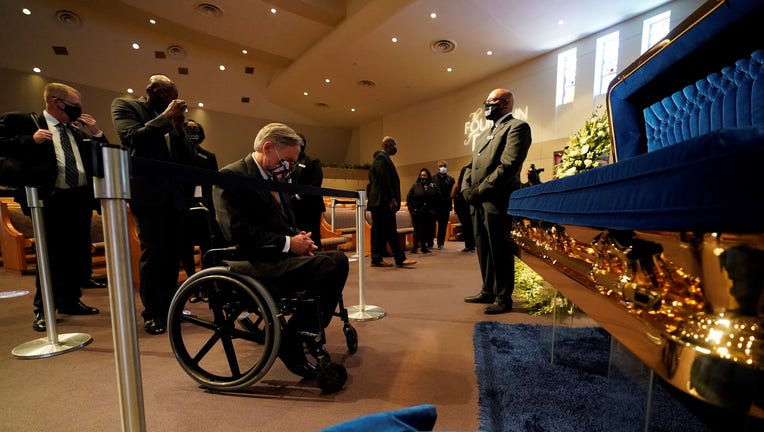 HOUSTON, TEXAS - JUNE 08: Texas Gov. Greg Abbott passes by the casket bearing the remains of George Floyd at a public visitation at the Fountain of Praise church June 8, 2020, in Houston, Texas. Floyd died after being restrained by Minneapolis police (Photo by David J. Phillip-Pool/Getty Images)

Texas Gov. Greg Abbott has paid his respects with hundreds of people mourning the death of George Floyd at a church in Houston, where Floyd grew up.

The Republican governor looked at Floyd’s body in a gold-colored casket at The Fountain of Praise church Monday for about 15 seconds, then lowered his head with his hands folded for several seconds more.

Abbott told reporters outside the church that he will include Floyd’s family in discussions about police reform and any related legislation.

“George Floyd is going to change the arc of the future of the United States. George Floyd has not died in vain. His life will be a living legacy about the way that America and Texas responds to this tragedy,” Abbott said.

Governor Abbott speaks to reporters outside of the public viewing for George Floyd in Houston.

Abbott said he planned to meet privately with Floyd’s family and present them with a Texas flag that was flown over the state Capitol in Floyd’s honor. The governor wore a striped crimson and gold tie, which he said was in honor of Floyd as those are the colors of Floyd’s high school.

Floyd, who was black and handcuffed, died May 25 after a Minneapolis police officer pressed his knee into his neck for several minutes even after he stopped responding. His death has inspired international protests.