AUSTIN, Texas (AP) - The Texas Legislature was on the verge Sunday of signing off on some of the most restrictive voting measures in the U.S., putting the GOP on the brink of a major victory in their nationwide effort to tighten voting access following the 2020 election.

A vote in the state House expected later Sunday is the last barrier to sending Republican Gov. Greg Abbott a raft of election changes that would eliminate drive-thru voting, empower partisan poll watchers and impose new requirements in order to cast a ballot by mail in Texas, which already has some of toughest voting laws in the nation.

Democrats dug in for one last and longshot challenge on the House floor but had little means of stopping the bill. Hours earlier on Sunday, the Texas Senate muscled the bill through shortly after sunrise after bringing it up for a vote in the middle of the night on a Memorial Day weekend, when the state Capitol was all but empty.

Even before the final House vote, Democrats said they would try to block the measure in court.

"It’s an awful bill," said Democratic state Rep. Jessica Gonzalez, the vice chairwoman of the House Elections Committee. "But I’m hopeful that this underhanded behavior, the way they undercut the process, will help us when we litigate this."

Under revisions during closed-door negotiations, Republicans added language that could make it easier for a judge to overturn an election and pushed back the start of Sunday voting, when many Black churchgoers head to the polls. The 67-page measure would also eliminate drive-thru voting and 24-hour polling centers, both of which Harris County, the state’s largest Democratic stronghold, introduced last year.

Texas is the last big battleground in the GOP’s nationwide efforts to tighten voting laws, driven by former President Donald Trump’s false claims that the 2020 election was stolen from him. Georgia and Florida have also passed new voting restrictions, and President Joe Biden on Saturday unfavorably compared Texas’ bill to election changes in those states as "an assault on democracy." 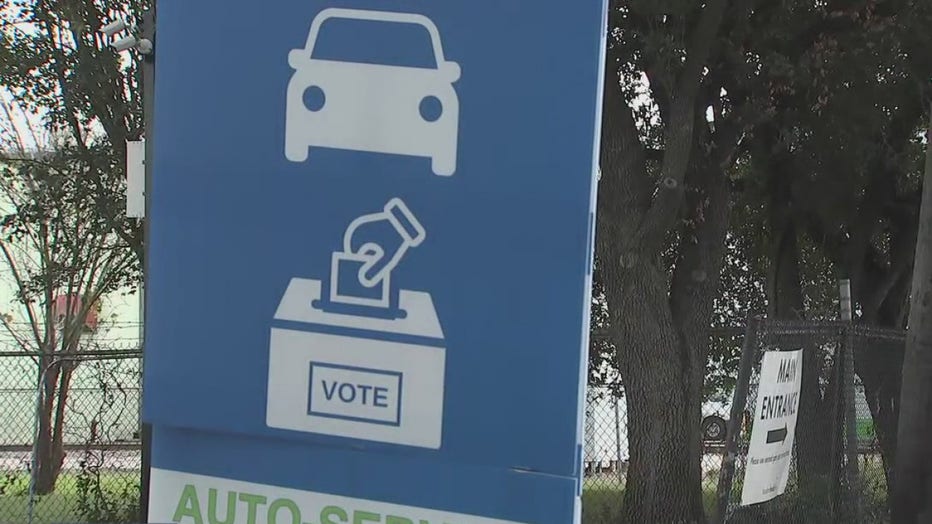 The vote in the Texas Senate came just a short time after a final version of the bill had been made public Saturday. Around midnight, Republicans wielded their majority to suspend rules that would normally prohibit taking a vote on a bill that had not been posted for 24 hours, which Democrats protested as a breach of protocol that denied them and the public time to review the language first.

The bill would newly empower partisan poll watchers by allowing them more access inside polling places and threatening criminal penalties against elections officials who restrict their movement. Republicans originally proposed giving poll watchers the right to take photos, but that language was removed from the final bill that lawmakers were set to vote on this weekend.

Another new provision could also make it easier to overturn an election in Texas, allowing for a judge to void an outcome if the number of fraudulent votes cast could change the result, regardless of whether it was proved that fraud affected the outcome.

Election officials would also face new criminal penalties, including felony charges for sending mail voting applications to people who did not request one. The Texas District and County Attorneys Association tweeted that it had counted in the bill at least 16 new, expanded or enhanced crimes related to elections.

GOP legislators are also moving to prohibit Sunday voting before 1 p.m., which critics called an attack on what is commonly known as "souls to the polls" — a get-out-the-vote campaign used by Black church congregations nationwide. The idea traces back to the civil rights movement. Democratic state Rep. Nicole Collier, chairwoman of the Texas Legislative Black Caucus, said the change is "going to disengage, disenfranchise those who use the souls to the polls opportunity."

Collier was one of three Democrats picked to negotiate the final version, none of whom signed their name to it. She said she saw a draft of the bill around 11 p.m. Friday — which was different than one she had received earlier that day — and was asked for her signature the next morning.

Major corporations, including Texas-based American Airlines and Dell, have warned that the measures could harm democracy and the economic climate. But Republicans shrugged off their objections, and in some cases, ripped business leaders for speaking out.

Texas already has some of the country’s tightest voting restrictions and is regularly cited by nonpartisan groups as a state where it is especially hard to vote. It was one of the few states that did not make it easier to vote by mail during the pandemic.

The top Republican negotiators, Hughes and state Rep. Briscoe Cain, called the bill "one of the most comprehensive and sensible election reform bills" in Texas’ history.

"Even as the national media minimizes the importance of election integrity, the Texas Legislature has not bent to headlines or corporate virtue signaling," they said in a joint statement.

Since Trump’s defeat, at least 14 states have enacted more restrictive voting laws, according to the New York-based Brennan Center for Justice. It has also counted nearly 400 bills filed this year nationwide that would restrict voting.

Republican lawmakers in Texas have insisted that the changes are not a response to Trump’s false claims of widespread fraud but are needed to restore confidence in the voting process. But doubts about the election’s outcome have been fanned by some of the state’s top GOP leaders, including Attorney General Ken Paxton, who led a failed lawsuit at the U.S. Supreme Court to try to overturn the election.

Lt. Gov. Dan Patrick, who chaired Trump’s presidential campaign in Texas, offered a $1 million reward to anyone who could produce evidence of voter fraud. Nonpartisan investigations of previous elections have found that voter fraud is exceedingly rare. State officials from both parties, including in Texas, as well as international observers have also said the 2020 election went well.