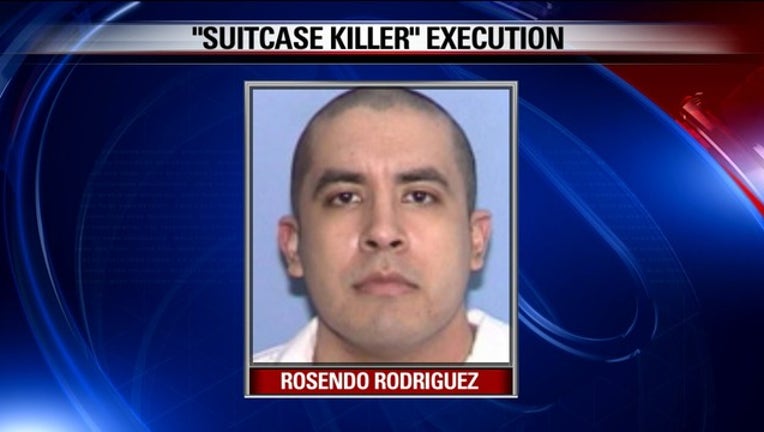 HUNTSVILLE, Texas (AP) - A San Antonio man who became known as the "suitcase killer" was executed Tuesday evening in Texas for the slaying of a 29-year-old Lubbock woman whose battered, naked body was stuffed into a new piece of luggage and tossed in the trash.

Rosendo Rodriguez III had also confessed to killing a 16-year-old Lubbock girl and similarly disposing her body in the trash in a suitcase.

Asked by the warden if he had a final statement, Rodriguez spoke defiantly for seven minutes and never apologized to relatives of his victims watching through a window.

"The state may have my body but they never had my soul," Rodriguez said. He also urged people to boycott Texas businesses to pressure the state into ending the death penalty and reiterated issues raised in late appeals that were rejected by the courts.

"I've fought the good fight, I have run the good race," he said. "Warden, I'm ready to join my father."

The execution was the fourth this year in Texas and seventh nationally.

The U.S. Supreme Court, less than 30 minutes before Rodriguez was taken to the death chamber, rejected an appeal to block his punishment.

Rodriguez's lawyers told the justices lower courts improperly turned down appeals that focused on the medical examiner's testimony at Rodriguez's trial for the September 2005 slaying of Summer Baldwin. State lawyers said the high court appeal was improper, untimely and meritless, and "nothing more than a last-ditch effort," according to Texas Assistant Attorney General Tomee Heining.

Workers at the Lubbock city landfill spotted a new suitcase in the trash, opened it and discovered the body of Baldwin, who was 10 weeks pregnant. Detectives used a barcode label sewn to the luggage to establish it was purchased a day earlier at a Walmart. Debit card records and store surveillance video identified the buyer as Rodriguez, a Marine reservist who'd been in Lubbock for training that included martial arts combat.

Jurors who convicted him of capital murder decided he should die after evidence showed Rodriguez also was linked to at least five other sexual assaults and had confessed to killing Joanna Rogers, the 16-year-old missing for a year when her mummified remains were found inside a suitcase at the same city garbage dump. Five women, including his high school girlfriend, testified he raped them. Evidence showed he initially met Rogers in an online chat room.

"This has been quite a traumatic event for all of us," Joe Bill Rogers, the slain teenager's father, said after watching Rodriguez die. "We're just fortunate it's all done."

He said an apology from Rodriguez "wouldn't have made a bit of difference. He just cared about himself, just a sociopath."

Baldwin's mother, Uvah Robak, said Rodriguez "went to his maker and he's got his justice now."

Court records also described Baldwin, the mother of four, as a prostitute.

Rodriguez lived in San Antonio with his parents and was arrested there days after Baldwin's body was discovered. Three weeks later, he gave Lubbock police a statement saying he killed her in self-defense when she pulled a knife on him after the two had consensual sex on Sept. 12, 2005, in a hotel room.

Testimony at his 2008 trial showed Baldwin had about 50 blunt force wounds and may have been alive when she was folded into the suitcase and tossed into a trash bin. The contents subsequently wound up at the city dump.

"Women were terrified of him. He used his charm and good looks and status for a long time to victimize women," Powell said. "In this case, the right guy is getting the appropriate punishment."