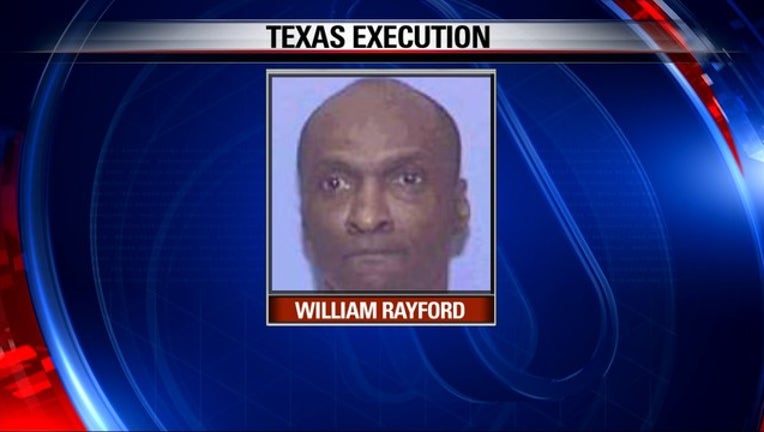 HUNTSVILLE, Texas (AP) - A Dallas man was executed Tuesday for the 1999 slaying of his ex-girlfriend while he already was on parole for killing his estranged wife.

William Rayford, 64, became the nation's second inmate put to death this year, both in Texas, when he received lethal injection for beating, stabbing and strangling 44-year-old Carol Lynn Thomas Hall. Her body was found about 300 feet (91 meters) inside a drainage pipe behind her home in South Dallas' Oak Cliff area. Hall's 11-year-old son, Benjamin, also was stabbed in the attack but survived. He testified against Rayford.

Asked by the warden at the Texas Department of Criminal Justice Huntsville Unit if he had a final statement, Rayford apologized repeatedly to his victim's four children who watched through a window a few feet from him.

"Carol didn't deserve what I done," he said. "Please try to find it in your heart to forgive me. I am sorry. It has bothered me for a long time what I have done."

He said he had made mistakes and asked God to forgive him.

"If this gives you closure and makes you feel better, I have no problem with this taking place," Rayford said.

As the lethal dose of pentobarbital began taking effect, he lifted his head from the pillow on the death chamber gurney, repeated that he was sorry and then said he was "going home."

He began to snore, and within seconds all movement stopped. He was pronounced dead at 8:48 p.m., 13 minutes after the powerful sedative was injected.

Among the four people who witnessed the execution was the victim's son who was stabbed in the attack. He and three siblings showed no emotion as they watched Rayford die. They declined interviews afterward.

The punishment was delayed while the U.S. Supreme Court considered - and later rejected - last-day appeals from Rayford's lawyers. The attorneys argued his death sentence was tainted because his trial lawyer in 2000 improperly introduced the subject of race as a factor in prison violence while questioning a prison expert during the punishment phase. Nadia Wood, a Dallas-based federal public defender, told the high court that in bringing it up, the trial lawyer implied "that people like Mr. Rayford - a black man - are the cause of the violence."

An assistant Texas attorney general, Jefferson Clendenin, disputed the argument, telling the justices the witness never testified as an expert in rates of violence because he wasn't qualified to do so and that none of the witness' trial testimony "even implied that African-Americans are more likely than others to be violent or that Rayford himself was a future danger."

Rayford's lawyers argued in another appeal that a federal judge improperly denied money to hire an expert for his appeals to look into his claims that his trial lawyers were deficient for not investigating whether Hall's slaying may not have qualified for a capital murder charge. They also argued Rayford suffered from brain damage from lead poisoning because he grew up near a toxic site and carried lead residue from old gunshot wounds.

Clendenin said evidence "more than established" Rayford kidnapped Hall while trying to kill her, supporting the capital murder charge. He said arguments about lead poisoning were based on a "vague, general and nebulous conclusion" by a defense expert.

Hall had known Rayford since they grew up in a Dallas housing project. Investigators said she had broken up with Rayford about two months before he entered her home on Nov. 16, 1999, using a key she didn't know he had. They argued and it turned violent.

Hall's son testified at Rayford's trial that he suffered a punctured lung from a stab wound. He said he was hit on the head when he tried to protect his mother, and that he watched her run from the home with Rayford pursuing her. He said he saw Rayford carry his mother toward the drainage pipe where her body eventually was found.

Police responding to a call about the attack arrested Rayford at the scene. Hall's blood was on his face and clothing. He told an officer Hall could be found "in the hole ... up in the sewer, in the water."

Rayford had been previously convicted of murder in 1986 for fatally stabbing his estranged wife, Gail Rayford, in front of their four children. She had obtained a court order four days earlier to keep him away.

He was sentenced to 23 years in prison for her slaying but was paroled after eight years under a former Texas law that allowed some prisoners to be released as the state struggled with prison crowding.

Rayford had been on parole for five years when Hall was killed. Relatives said she was aware of his previous murder conviction when they became a couple and believed it was her Christian duty to give people second chances.

Another Texas prisoner is set to die this week. John David Battaglia, 62, of Dallas, is to be executed for the May 2001 shooting deaths of his daughters, ages 6 and 9.