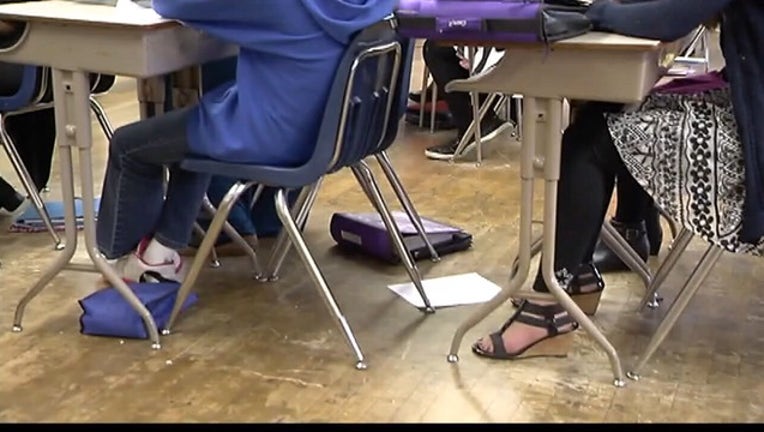 AUSTIN, Texas (AP) - The Texas Board of Education preliminarily voted Tuesday night to restore Hillary Clinton and Helen Keller to the state's history curriculum and to slightly soften language about the Arab-Israeli conflict - surprising moments of bipartisanship for members who have long waged ideological battles about how students in the nation's second largest state learn history.

The moves came after the board's 10 Republicans and five Democrats heard hours of often impassioned testimony from students, teachers, activists and university experts on proposed edits meant to streamline academic standards for history. A final vote is scheduled for Friday and more changes can still be made.

In September, the board voted to cut lessons on former secretary of state, senator and 2016 presidential candidate Clinton, as well as Keller, an iconic activist who was deaf and blind.

Emotions often ran high Tuesday, particularly when Gabrielle Caldwell, a 17-year-old hearing- and visually-impaired student, spoke about how Keller was the only connection many people have to the deaf and blind community.

"I am hoping you keep Helen Keller being taught in our schools," Caldwell said. "She's a hero."

The board voted hours after Caldwell's testimony to restore Keller to third grade curriculums with minimal debate. It also restored a previously trimmed second grade lesson about Women Airforce Service Pilots, civilians who flew during World War II and were the first U.S. women to pilot military aircraft.

The proposal to again include Clinton sparked more debate but eventually passed easily. Democrats said Texas girls will be inspired by - and should be taught about - the first female presidential candidate to earn a major party nomination, while Republicans said they'd heard from other residents demanding to know why Clinton was cut in the first place.

"I think she qualifies as a significant political leader," said Marty Rowley, a Republican from Amarillo, while noting that he didn't agree with Clinton's politics.

Texas has around 5.4 million public school students, more than any state but California. Teaching board-approved lessons isn't always mandatory, but its sanctioned curriculum can affect what's published in textbooks.

The state's market is large enough that its curriculum sometimes influences what goes into materials used elsewhere around the country - though that's less true in recent years as technology allows for tailoring what's taught to different states and even individual school districts.

Other hot-button curriculum topics went unchanged despite long-standing objections from university professors and other experts. The board refused to modify controversial lessons on the causes of the Civil War and asking students to explore the biblical figure Moses' influence on the nation's Founding Fathers.

Political lessons referencing Moses have been in Texas curriculums since 2010. A panel of experts had proposed cutting those, but the board voted in September to preserve them. It also retained language that students learn how "Arab rejection of the State of Israel has led to ongoing conflict" in the Middle East.

On Tuesday, the board voted to make rejection of many Arabs of the State of Israel a contributing factor to Middle East conflict. But it didn't change references to Moses, or instruction on how sectionalism and states' rights were "contributing factors" to the Civil War, while also noting in the curriculum that slavery was a "central cause."

"There are people who believe that some of the events that happened long before this became a boiling point for war was the fact that they did not want to be told what to do by the central government," Pat Hardy, a Republican from Fort Worth, said of the Civil War, adding that southern states were "very, very independent" and didn't like Washington telling them what to do.

Ruben Cortez, a Democrat from the Texas-Mexico border city of Brownsville, responded: "I think we just need to do the right thing, and I think I better stop talking before I get upset."

Marisa Perez-Diaz, a Democrat from suburban San Antonio, said the curriculum wording was meant to skirt "the real issue, which is slavery."

No changes were made despite nearly 200 historians and scholars signing a petition circulated by the Texas Freedom Network, a watchdog group and frequent board critic, which said such standards "resurrect the 'Lost Cause' myth, a long-discredited version of history first promoted in the late-nineteenth and early twentieth centuries to glorify the Confederate past and reinforce white supremacist policies."