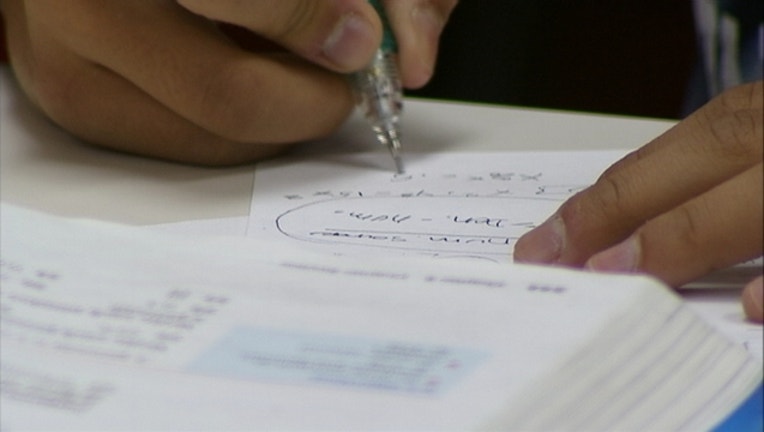 The all-Republican court reversed a lower judge's finding that spending on school districts was inadequate and unfairly distributed among wealthy and poor areas because of $5.4 billion in classroom cuts approved by state lawmakers in 2011. The Texas constitution mandates a fair and efficient system providing a "general diffusion of knowledge."

Major legal battles over classroom funding have raged in Texas six times since 1984, but this marks just the second time that justices have failed to find the system unconstitutional.

"Our Byzantine school funding 'system' is undeniably imperfect, with immense room for improvement. But it satisfies minimum constitutional requirements," Justice Don Willet wrote in the 9-0 decision that ended the largest court case of its kind in state history.

The justices implored lawmakers to make serious changes, but said "our judicial responsibility is not to second-guess or micromanage Texas education policy."

Texas has a "Robin Hood" school funding system in which wealthy districts share local property tax revenue with those in poorer areas. Schools rely heavily on property taxes because Texas has no state income tax; only California has more public school students than Texas' 5.2 million.

School districts that educated three-quarters of Texas' public school students were on the same side in the case. While those in poor areas said funding was inadequate, districts in well-to-do locales argued that voters often refuse to approve local tax increases because much of the money would go elsewhere.

"It's a huge disappointment," said Rick Gray, who represents more than 400 districts that are mostly in poorer areas. "Anybody who looks at the system knows it's hopelessly broken."

But Republican Gov. Greg Abbott, who was attorney general when the case was first filed in 2011, called the outcome "a victory for Texas taxpayers and the Texas Constitution" that "ends years of wasteful litigation." And his successor, Attorney General Ken Paxton, complained that Texas residents "have faced an endless parade of lawsuits following any attempt to finance schools in the state."

The state spent $9,561 per K-12 student in the current school year, the National Education Association said last week. That's more than $2,500 below the national average, and ranks Texas 38th nationwide.

In the 2010-2011 school year, before the Legislature's $5.4 billion in cuts to education funding and related classroom grant programs, per-pupil spending was only about $1,700 below the national average.

Those 2011 cuts prompted school districts to sue, arguing they could no longer properly function amid Texas' public school enrollment growth of nearly 80,000 students annually. Exacerbating the problems, they argued, was the Legislature's increased demand for student and teacher accountability as measured by standardized testing scores and tough curriculum standards. Districts also pointed to the growing number of students who need extra instruction to learn English, which is costly.

"The 'imperfections' cited by the court in its decision are no small wrinkle," Democratic State Rep. Ana Hernandez, legal counsel to the Mexican American Legislative Caucus, said Friday in a statement.

District Judge John Dietz, an Austin Democrat, ruled in 2013 that the state's school finance system was unconstitutional. State lawmakers responded by restoring more than $3 billion to schools and cutting the number of standardized tests required for high school students to graduate from a nation-high 15 to five.

Dietz reopened the case to hear how that would impact schools, but again struck down the system in 2014. Last year, the Legislature appropriated another $1.5 billion for public education. But school district attorneys told the Supreme Court in oral arguments last fall that it still wasn't enough to cover the hole left by the 2011 cuts when adjusted for enrollment growth and inflation.

Friday's decision means state lawmakers won't have to devise a new school funding system when they reconvene in January.

"The school funding issue, for now, has been resolved," Lt. Gov. Dan Patrick, who heads the state Senate, said at the Texas Republican Convention in Dallas. "The Supreme Court said we're right."

This story has been corrected to show in the 11th paragraph that the Legislature cut $5.4 billion in education funding in 2011, not $5.4 million.