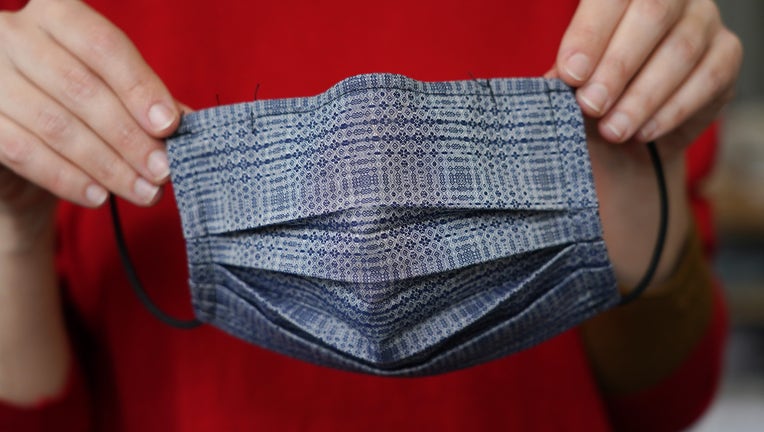 FILE PHOTO. A friend of of master tailor Ala Hadye holds up a made-to-order protective face mask at Hadye's workshop on April 02, 2020 in Berlin, Germany. (Photo by Sean Gallup)

SAN ANTONIO, Texas - Officials in the San Antonio area on Wednesday ordered people to wear face masks in public when social distancing isn’t possible and warned that businesses could face fines of up to $1,000 for failing to comply with county health policies in the next five days.

The executive order from Bexar County Judge Nelson Wolff came amid hospitalization rates as Texas continues to reopen during the coronavirus pandemic.

According to the order, businesses will be required to develop a health and safety policy that requires the use of face coverings by employees and visitors when “in an area or performing an activity which will necessarily involve close contact or proximity to co-workers or the public where six feet of separation is not feasible.”

Businesses have five days to implement the health and safety policy, which could also include temperature checks or health screenings, and they must post the policy to provide notice to workers and visitors.

Businesses that fail to comply with the order within five days could face a fine not to exceed $1,000 for each violation.

The order also asks that all people 10 years and older wear a face covering when in a public place where it is difficult to stay six feet away from others or in areas that involve close proximity with other coworkers. Individuals who do not wear a face covering will not face a fine. Governor Greg Abbott issued an executive order in May that said no jurisdiction can impose a civil or criminal penalty for failure to wear a face covering.

San Antonio Mayor Ron Nirenberg joined Wolff in a press conference to say they are concerned younger people will get infected with COVID-19 and take the virus home to older family members. People younger than 40 are showing the most infections in the area, the mayor said.

“What we are doing here is to protect the life and safety of the San Antonio community,” Nirenberg said.

The local order comes a day after Texas Gov. Gregg Abbott acknowledged that many Texans have become lax about wearing masks and social distancing as his statewide virus restrictions have been lifted. He urged them to take greater personal responsibility for stopping the spread but said he would not require the general public to wear masks.

In May, Texas Republican Attorney General Ken Paxton lashed out at the cities of San Antonio, Dallas and Austin over what he called “unlawful” local orders that are tougher than restrictions prescribed by Abbott, and threatened lawsuits if the cities don’t back off.

Wolff said he had reached out Abbott’s chief of staff and assistant chief of staff today to notify them of his new executive order but had yet to hear back. He said he hoped the governor would be supportive of his decision but that attorneys were ready for a legal fight.

“Our office urges officials and the public to adopt and follow the health protocols for businesses established by doctors,” Wittman said.

Nine mayors of Texas’ largest cities, including San Antonio and Dallas, sent a bipartisan letter yesterday to Abbott, a Republican, asking for local governments to have the authority to enforce the use of face coverings.

Texas hit a record high for COVID-19 hospitalizations Wednesday with 2,793, an 85% increase since Memorial Day. The state has set a record for hospitalizations nine of the last 10 days. Abbott insisted Texas hospitals can handle the rising numbers of patients and the Republican has routinely touted available hospital space and intensive care beds as proof hospitals won’t be overwhelmed.

MORE: Gov. Abbott says recent COVID-19 spike is a concern, but not alarming

Texas Supreme Court Justice Debra Lehrman said Wednesday her symptoms while battling COVID-19 were “quite severe” but she is now recovered.

Lehrman is one of nine judges on the state’s highest court for civil law. She announced May 21 that she and her husband Greg tested positive for the coronavirus despite being diligent about following social distancing guidelines. She is the highest-ranking state official in Texas known to test positive for the virus.

“Greg & I are so thankful for the many kind thoughts and prayers that undoubtedly helped us through this challenging time. Although my symptoms became quite severe, we are both fine with negative test results. Now, on to donating our plasma to help others!” Lehrman tweeted in announcing recovery.

The Associated Press contributed to this report. This story was reported from Houston.