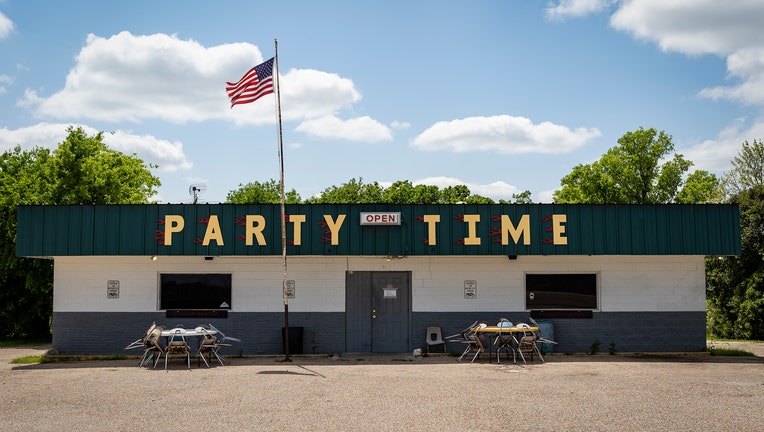 Party Time Bar outside of Temple is closed because of the coronavirus pandemic. (Jordan Vonderhaar for The Texas Tribune)

“Some bars and their associations have offered some very helpful ideas,” Abbott said of reopening, “and we will continue to work with them on that process.”

But Barrineau, who has laid off his 12 staff members and suffered hundreds of thousands of dollars in losses at Drink Texas, a bar with locations in San Antonio and Boerne, said that assertion of collaboration is “insanity — he doesn’t care about small businesses.”

Michael Klein, the head of Texas Bar and Nightclub Alliance, which represents thousands of bars, said that Abbott’s statement about working together was “incorrect,” carefully choosing his words. The TBNA laid out a six-point plan to reopen in August, but Klein said the governor, whom he referred to strictly as “anti-business Abbott,” has not responded to the plan.

“We’ve never heard back from them,” Klein said. “We believe that he is disingenuous.”

Abbott’s office did not respond to requests for comment.

While restaurant owners applauded Abbott’s move to allow them to increase operations, Klein said Thursday’s ruling was “completely unacceptable” for many bars and other facilities where alcohol sales make up more than half of the revenue. It could leave 30% of Texas bars and 39% of distilleries permanently closed within six months, industry leaders said.

After shutting down dine-in service in March, as officials across the globe have done this year, Abbott eventually opened restaurants and then bars this spring. But in late June, as cases began to soar in Texas, Abbott ordered restaurants to scale back to 50% capacity and closed all bars, which Texas defines as all facilities where alcohol makes up more than 51% of sales — even establishments that operate like what people think of as restaurants.

When Abbott ordered bars closed again, he expressed regret at allowing them to reopen so quickly. Thursday’s announcement marked the end of a monthslong wait from bars to find out if they could open as cases have declined.

At Abbott’s press conference, he maintained that bars are “nationally recognized as COVID-spreading locations” and that the case numbers need to be further contained before they can open. Abbott’s office also did not respond to questions about what those metrics might be.

Spread from conventional bars and nightclubs has been widely documented throughout the U.S., and infectious disease experts caution going inside establishments that don’t follow social distancing protocols.

Kristin Mondy, chief of the infectious disease division in the University of Texas at Austin’s medical school, said there is increased risk in spreading the virus if strangers mingle in a tight, closed space, especially as drinking could cause bar customers to loosen their inhibitions.

Klein said the industry’s plan would reduce those issues by complying with Centers for Disease Control and Prevention requirements.

Some of the requirements in TBNA’s plan include ensuring all patrons are seated at their own tables, barring dance floors and mingling among groups, requiring face masks for all servers and customers when not at their tables, and conducting temperature checks upon entry. Mondy said these procedures could help as long as mask-wearing and social distancing are enforced.

Abbott’s office did not respond to questions about whether it received this plan.

To permit 51-percenters to reopen, the Texas Alcoholic Beverage Commission has allowed many of them to reclassify as restaurants, as long as they follow necessary steps.

“The application requires the [applicants] to provide a projection of their alcohol sales percentage, and they must show that they have the ability to provide food service to their customers,” said commission spokesperson Chris Porter. “This means multiple entrees, and the food must be available the entire time the business is open to customers.”

Already, almost a quarter of the nearly 8,000 certified Texas bars have applied for this recertification, and more than 1,000 have reopened as restaurants. Few have been denied thus far. Barrineau is one of hundreds whose applications are still being processed.

Still, many bar owners feel this process is onerous and cost-prohibitive — the supplemental license costs $776 every two years, in addition to reorganizing the facility to allow for more cooking — and misses the point.

Barrineau said having more food available doesn’t change the nature of his business, especially if he’s following the guidelines TBNA has set out. Still, he wants to reopen and thought it necessary to apply.

“There’s still bills to pay,” he said. “It’s been devastating for me and my staff.”

Sandra Young, who has owned Bokeeters Cocktail Bar in Montgomery County for 11 years, reopened her bar in August despite Abbott’s June executive order that prohibited doing just that. After the TABC asked her to shut down and twice suspended her license, she has remained open because she feels the reclassification is a “money grab.”

Young, who took out $67,000 in loans at the beginning of the pandemic to pay her bills and staff, has no plans of closing.

Bokeeters is one of only a few bars across the state that have actively gone against Abbott’s orders. According to Porter, only 150 of the 16,000 TABC inspections since June have resulted in suspensions. Still, many bars flouted the governor’s rules in June, which caused dozens to be shut down at that time.

With more than five months of closures, Klein said more than 100,000 employees have been affected financially, and more than 35,000 letters have been sent to the governor’s office without a response.

Other 51-percenters, including distilleries, wineries and breweries, feel the state’s classification rules unfairly include them.

Still, Mondy said risks can vary in these types of facilities, which can range from safe, socially distanced outdoor experiences to more risky tastings in a closed cellar with people packed together.

But industry advocates say many of these facilities are only open during the day and have no infrastructure in place to easily start selling food. The bulk of their revenue comes from on-premise sales and experiences.

Cord Switzer, who has helped run Fredericksburg Winery for almost 25 years with his family, said he has been able to technically and legally become a food server — but no one that comes is actually eating the food. That’s not why they go to a winery, he said.

“It makes no sense to me,” Switzer said. “We have never been interested in being in the food service business. We have no intent of doing that in the future, but it was our only choice.”

Switzer started wine tastings on Saturday for the first time in two months and hopes to begin recouping his losses after making 30% of last year's revenue. But he doesn’t understand the governor’s categorization, and industry advocates share Switzer’s confusion.

“Texas winery owners continue to be perplexed by Governor Abbott's steadfast refusal to recognize that the lion's share of Texas alcohol manufacturer's tasting rooms have little, if anything, in common with bars and nightclubs,” said Patrick Whitehead, the president of the Texas Wine and Grape Growers Association, in an email. “Governor Abbott's arbitrary, and frankly unfair, act of lumping our tasting rooms into the category of bars is like a surgeon operating with a chainsaw rather [than] a scalpel.”

Switzer’s money troubles are not unique; nearly half of distilleries surveyed by the Texas Whiskey Association have experienced revenue losses greater than 60%. Spence Whelan, the head of the association, which represents distilleries across Texas, said continued restrictions could be disastrous for the industry, which normally relies on a big fourth quarter in holiday sales to stay afloat. This fall, with little or no visitors, that could be wiped out. Under Texas law, whiskey distilleries cannot ship or deliver whiskey directly to customers, nor can they sell more than two bottles of whiskey per person.

At the very least, Whelan said, those rules should be relaxed. Many places don’t want to open yet anyway, and there are other ways to bring in money. He said the industry has sent more than 15,000 letters to the governor’s office asking to waive those restrictions and has received no response.

“We need some way to make revenue,” Whelan said. “We’re not just asking only for reopening. We’re asking for a way to survive. Why are they ignoring us?”

The University of Texas at Austin has been a financial supporter of The Texas Tribune, a nonprofit, nonpartisan news organization that is funded in part by donations from members, foundations and corporate sponsors. Financial supporters play no role in the Tribune's journalism. Find a complete list of them here.

"Texas bars and distilleries rip Gov. Greg Abbott for leaving them out of "unacceptable" reopening plan" was first published at https://www.texastribune.org/2020/09/19/texas-bars-greg-abbott-reopening/ by The Texas Tribune. The Texas Tribune is proud to celebrate 10 years of exceptional journalism for an exceptional state.