The groups blame the benefits for a labor shortage at businesses like retail stores and restaurants.

To get benefits in Texas people still have to show they’re looking for work, but some businesses say they're not getting applicants.

Stone's hardware, in the Casa View area of Dallas, is one of many small businesses struggling to hire workers as the economy comes back to life.

"Heard from people looking, they don't have to look as hard as a couple of year ago," Stone said.

Glenn Hamer, Texas Association of Business CEO, believes the federal government's unemployment stimulus is providing a disincentive for many people to go back to work while job openings are at historically high levels.

"If you go around any city or town in Texas you will see job openings everywhere for jobs well over minimum wage, talking $17-$18 restaurants and hotels service sector jobs," Hamer said. 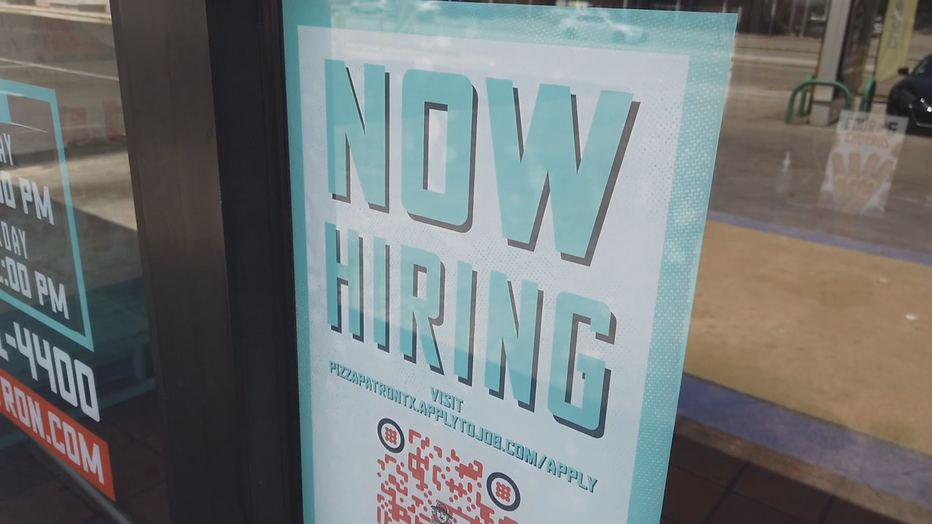 Take McDonalds for example. The fast food chain announced Thursday it will boost pay an average of ten percent at company-owned stores to entice thousands of new workers.

But David Villalobos with the Texas Organizing Project says the federal stimulus is still a lifeline for many unemployed.

"The state of Texas and Governor Abbott should not be playing politics with the livelihoods of our people," Villalobos said.

With the additional federal benefits extended into September, unemployed Texans can receive $1,500 - $3,300 per month depending on their wage history.

"A year ago the federal supplement was absolutely the right thing to do. A lot of people lost their jobs for no fault of their own. We're at a completely different point now. Thanks to American ingenuity we have multiple vaccines," Hamer said.

Stone says he has two openings he can't fill right now. Even so, he feels conflicted about the request to reject federal money."

"On the one hand I know firsthand people who those benefits have kept their bills paid. Hard to take a hardline stance that it is wrong. But as a business owner, it's affected us, harder to find qualified people who want to work," Stone said.

Abbott’s office has not publicly responded to the call to reject the extra unemployment.

North Texas employers faced with a shortage of workers this summer

Chamber of Commerce calls for end to enhanced jobless aid