A North Texas domestic violence center has received nationwide attention after it posted a little boy’s heartbreaking letter to Santa.

Kathryn Jacob is CEO of Safe Haven Tarrant County, a non-profit domestic violence shelter that helps victims and their families.

She is reassuring people that the boy who wrote this letter and his mother are safe. The shelter would never have posted it to social media if that were a concern.

Jacob said the little boy’s mom found the letter to Santa in his backpack. The loss of innocence and vulnerability that is felt through this letter has resonated with many.

“Dear Santa, we had to leave our house. Dad was mad…Mom said it was time to leave and she would take us to a safer place where we don’t have to be scared…I’m still nervous,” the boy wrote in the letter. “I don’t want to talk to the other kids. Are you still going to come this Christmas? We don’t have any of our stuff here.”

“When he’s like, ‘I’m nervous. I don’t want to talk to the other kids.’ That’s raw,” Jacob said. “That’s a very raw emotion, and I think people can relate to that.”

The 7-year-old also asked for chapter books, a dictionary, compass and watch, and one more thing: “I also want a very, very, very good dad. Can you do that too?” 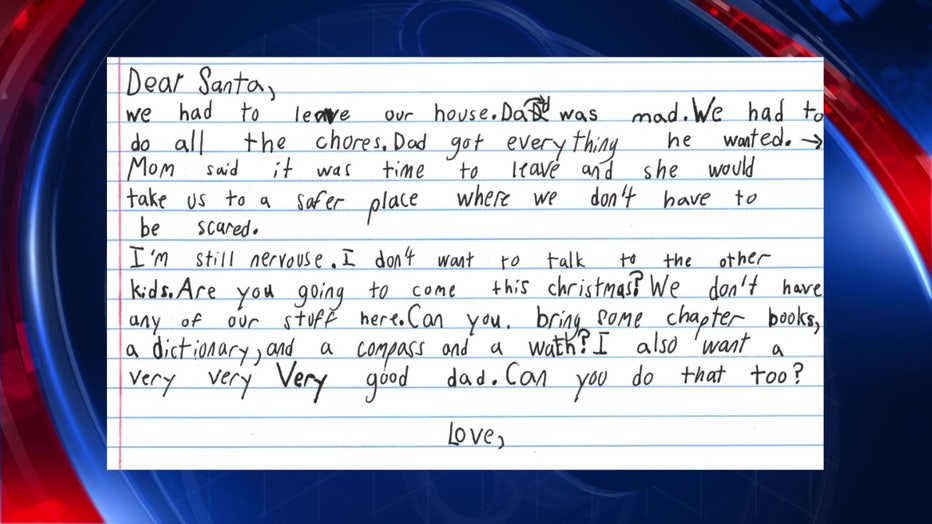 Unfortunately, Jacob said the letter came as no surprise. It's something the shelter sees year-round.

Currently, Safe Haven Tarrant County is helping 72 other children through the holiday season.

The shelter has collected thousands of toys for mothers. With those toys, Safe Haven has a store in Arlington so those mothers can shop for presents to make sure their children have Christmas.

Jacob reassures that the boy who wrote the letter will get the books and compass and watch he is asking for. And she has her own Christmas wish for the children.

“I would say the biggest thing that we want is um… is people to cheerlead for these families,” she said. “Cheerleading. We need cheerleading.”

One in three women in Tarrant County will experience domestic violence, according to Safe Haven. And children like this 7-year-old will witness it.

Safe Haven is no longer in need of toys this year, but it puts a list out each month with ways people can help. It also takes monetary donations year-round.