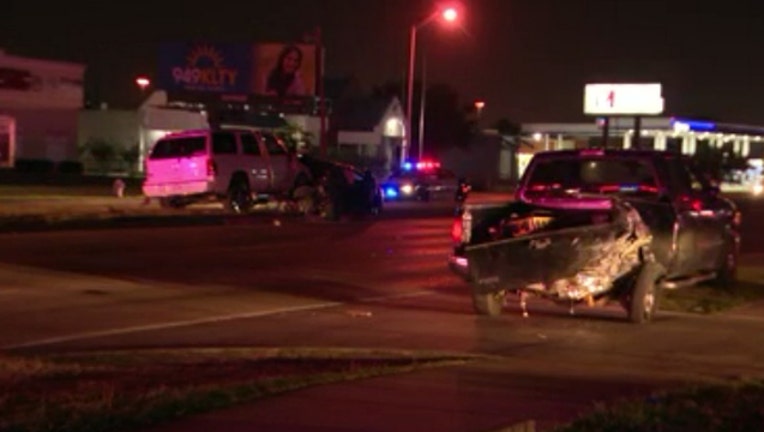 DALLAS - A 19-year-old is expected to be charged with intoxication manslaughter for his part in a fatal crash early Sunday morning on Harry Hines Blvd.

Police say the crash happened just after 1 a.m., in the 11100 block of Harry Hines Blvd.

The 19-year-old was driving a white Cadillac Escalade northbound with a passenger in the front seat.

Also in the northbound lanes, were a Honda Civic and a black Ford F-250.

Investigators found that the driver of the Escalade was traveling at a high rate of speed, when he crashed into the F-250, then the Civic.

When the Escalade crashed into the Civic, it caused the Civic to cross two lanes of traffic, before it came to rest on the median.

The driver of the Civic, a 42-year-old man from Mesquite, was pronounced dead at the scene, while the driver of the F-250 was not transported from the scene. The victim has not yet been identified by police.

The driver and passenger of the Escalade fled the area on foot, but were later taken into custody by police.

Police say the driver of the Escalade is expected to be charged with intoxication manslaughter and intoxication assault.