The Dallas Independent School District will make a decision about the rest of the school year next week.

DALLAS - The Dallas Independent School District will make a decision about the rest of the school year next week.

Superintendent Dr. Michael Hinojosa gave an update on the district Monday morning. He believes it’s very unlikely that students will return to their campuses before the start of summer. He also thinks Texas could be one of the next states to join the 11 that have already canceled traditional school this year.

“We have not hit the peak yet and of course we’re further behind than some of these other states. And so, to me the likelihood that we’ll have regular school this school year is very doubtful,” he said. 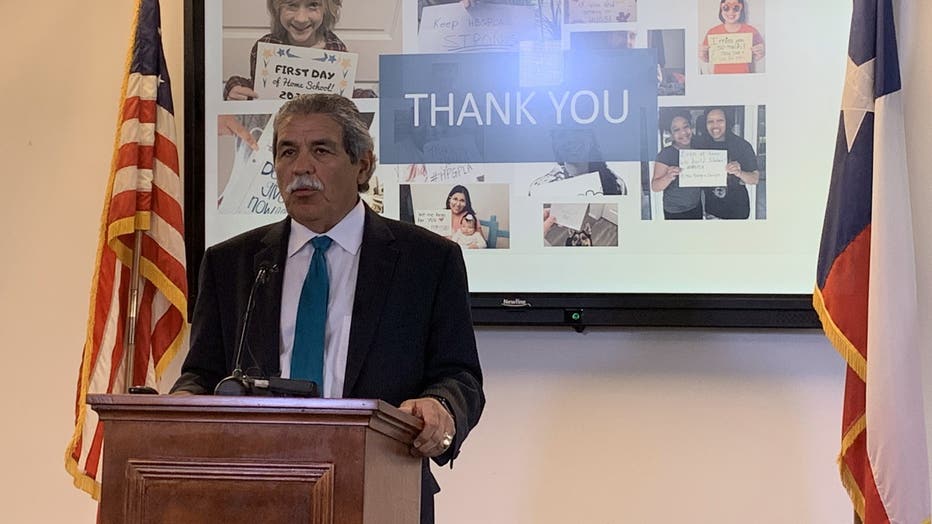 However, Hinojosa said schools have been able to make contact with about 99% of the students. The majority are now connected to their teachers using electronic devices provided by the district.

Dallas ISD has issued about 9,000 mobile hotspots to families and has about 15,000 more on order. Some of those devices will be paid for with the $50 million in stimulus funding the district expects to receive from the federal government.

Administrators are still working out the details of how to handle graduation, how teachers will be evaluated and how students will be graded for the remainder of the year.

Fort Worth ISD has already switched to a pass/fail grading system. Dr. Hinojosa said they don't want to rush that decision which could impact graduating seniors.

“We’re going to be making decisions rather quickly. We’ve had three meetings on this and we hope to make an announcement within the next week or so,” Hinojosa said. “But we’re gonna not harm students. There’s class rank to worry about. There’s GPAs to worry about. And we’re in a new unchartered time but we also don’t want to make a hard decision and then it impacts somebody on eligibility.”

Hinojosa said it is possible that some work will be made up during the summer.

“We are really studying summer right now. We know that we’re going to probably focus on the students that got furthest behind that have the biggest needs,” he said.

Hinojosa even said they are preparing for a worst-case scenario of the pandemic stretching into fall.

“We have to be prepared as we go into the fall,” he said. “The Spanish Flu had other spikes. We have to be ready where we can be and more coherent in the fall should we have to revisit this in the future.”

While there is so much uncertainty right now, Dr. Hinojosa is certain this crisis will bring lasting changes.

“I predict this will rock our world,” he said. “We are the only industry that has not changed. This will force us to change things.”

During Monday’s news conference, the superintendent thanked the Dallas Mavericks for donating $10,000 in Kroger gift cards that will be distributed to families in need.

Hinojosa also mentioned about a dozen Dallas ISD employees have tested positive for COVID-19. One staff member at Lang Middle School has died from the virus. There are also four DISD police officers with COVID-19, which is 3% of their force. One district police officer is not doing well.