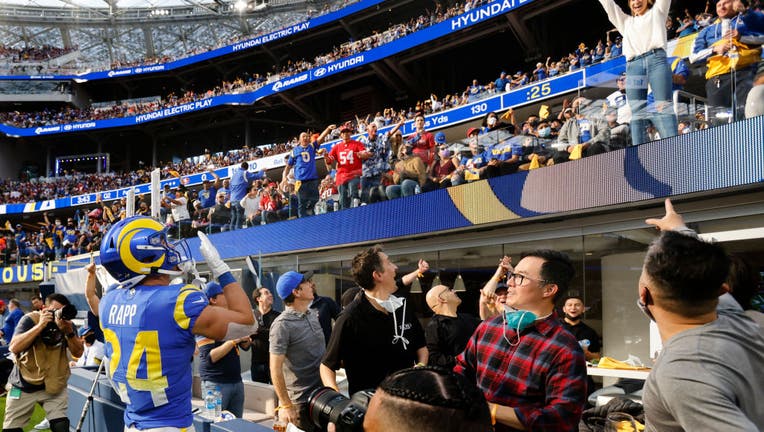 INGLEWOOD, CA - JANUARY 9, 2022: Los Angeles Rams free safety Taylor Rapp (24) tosses the ball to girlfriend Dani Johnson after an interception against the 49ers in the first half on January 9, 2022 at SoFi Stadium in Inglewood, California.(Gina Fera

INGLEWOOD, Calif. - Los Angeles Rams Taylor Rapp got two rings Sunday night at SoFi Stadium, but only had to pay for one. The third-year safety dropped to one knee on the field after the Rams' 23-20 victory over the Cincinnati Bengals in Super Bowl LVI, to propose to his girlfriend, Dani Johnson.

The Rams posted the moment on their Twitter page after the victory after their second Super Bowl win in franchise history. Rapp got on one knee, still in pads, wearing a Super Bowl Championship t-shirt over his jersey to propose to his high school sweetheart.

Johnson appeared to be in disbelief before ultimately saying yes. Friends and teammates were behind Rapp cheering their teammate on for the couple's special moment.

Rapp finished the regular season tied for the team lead in interceptions with four, and second on the team in total tackles.