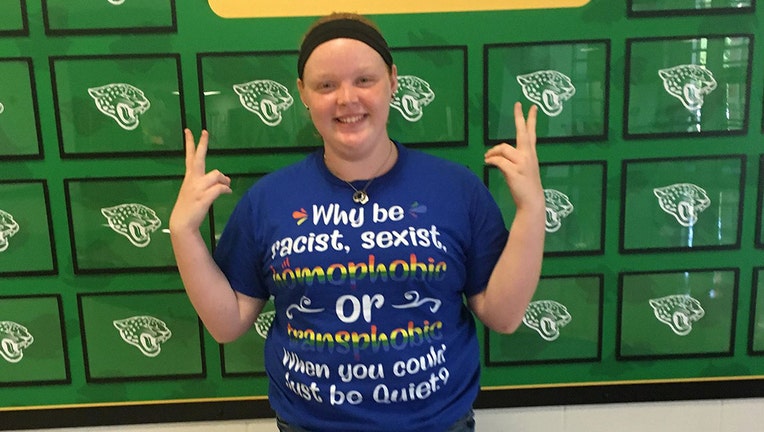 GEORGETOWN, Ind. - Parents of an Indiana teenager are hoping for an apology after their daughter was pulled from class and given in-house suspension for a T-shirt that read, “Why be racist, sexist, homophobic or transphobic when you can just be quiet?”

Renee Williams posted about the incident on her Facebook page. Her daughter attends Highland Hills Middle School in Indiana.

“I am beyond upset by the events that happened today. Our 13 year old daughter was pulled from class multiple times because she was wearing an anti discrimination t-shirt,” Williams wrote.

Her daughter explained in a handwritten letter that she was pulled from her physical education class and told by her teacher that the shirt was breaking dress code and was told by school administrators that the t-shirt was “inappropriate and could be seen as disrespectful.”

She added that she was given three options: to either wear the shirt inside out for the rest of the day, put on a jacket, or switch to a different shirt. She chose to wear a hoodie to cover the shirt.

Later that day, she said another teacher read through the dress code handbook with her where they found nothing that related to the shirt she was wearing, prompting her to take off her jacket. When she did, she was sent to in-house suspension.

According to the the school’s dress code, “students are cautioned against inappropriate shirts that may be suggestive, obscene or promote alcohol, tobacco or drug products or use.”

Williams said in her Facebook post that she and her wife were asked to come to the school to give their daughter an extra shirt and said her daughter was given the option to change shirts or go home.

“We are disappointed in the way she was singled out and treated,” Williams said on Facebook.

“An apology would be nice, but what we really want is diversity and inclusion training to create a safe environment for LGBTQ, immigrants, children of color, children with disabilities, and other diverse students to feel safe, loved and respected,” said Williams.