The driver of an 18-wheeler said strong winds from Friday's storms flipped his vehicle onto its side while he was driving on 635.

IRVING, Texas - The driver of an 18-wheeler said strong winds from Friday's storms flipped his vehicle onto its side while he was driving on 635.

This happened at 635 and MacArthur. Police arrived on scene to find the 18-wheeler in the grass next to the highway.

The driver, who suffered minor injuries, said the wind caught his vehicle, which caused it to flip on its side. The back end was about 10 feet off into the grass between 635 westbound and the service road, on the other side of a short barrier.

It’s unclear at this point if there was any sort of circulation, or it was simply straight line winds that derailed the truck.

Crews used a crane and were able to get the 18-wheeler back upright. The scene was cleared a short time later. 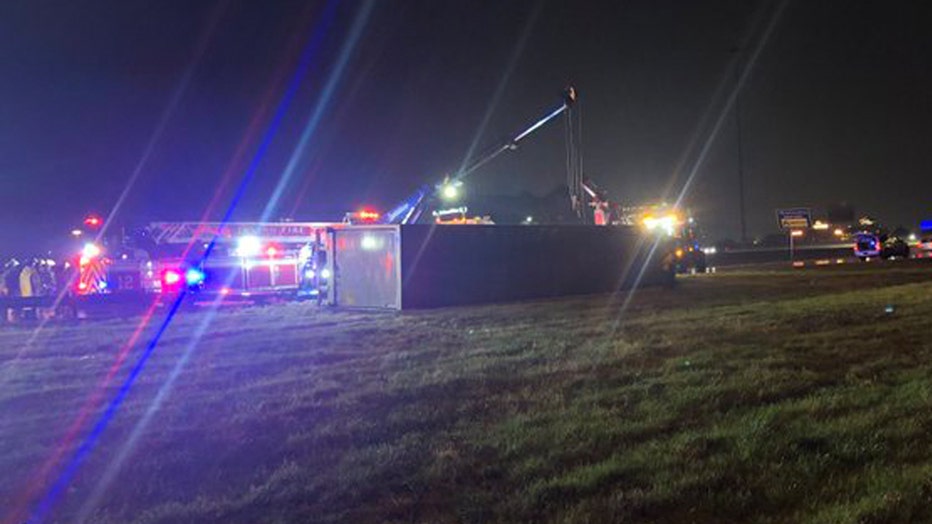 The National Weather Service said there was wind damage reported right in the area around 635 and MacArthur.

Just across the interstate, winds left some damage at the Hilton Garden Inn at Las Colinas Boulevard. A section of the wall was torn off by the strong wind gusts. Some of the sheetrock and insulation was pulled off and thrown into the parking lot. Fortunately, hotel workers say no guests were hurt.