Hall is holding listening sessions in neighborhoods across the city to get input for department's five-year strategic plan.

The event came just days after a man was murdered at a park and police officials unveiled a plan to deploy extra officers to neighborhoods hit hard by violent crime.

Hall is holding listening sessions in neighborhoods across the city to get input for department's five-year strategic plan.

“Never in the history of the department have we included you in building this plan,” Hall told the audience. 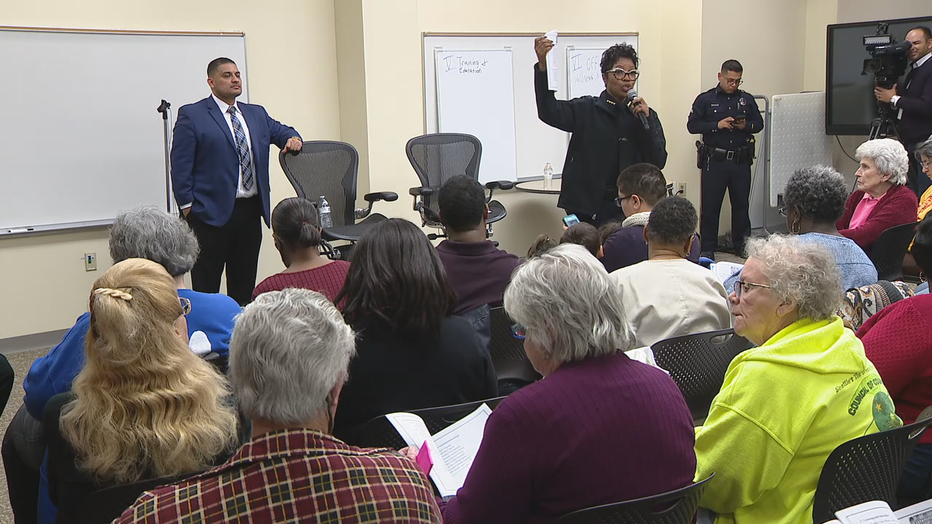 But a 15 percent increase in violent crime that included more than 200 murders in Dallas last year was top of mind for attendees. Chief Hall announced earlier this month a short-term plan with a goal to reduce overall crime by five percent citywide.

“There's so much going on even during the day. The area I live in, the guys stand out all day selling drugs to anyone who rolls up on them,” said Laruth Casteel, a Pleasant Grove resident.

Casteel is a neighborhood crossing guard and said she’s worried about her safety. Last week a man was found murdered in nearby Crawford Park.

Other residents, like Thomas Meador, are concerned too. His house was recently burglarized.

DPD is also starting a pilot program to help combat crime in the southern sector of the city. Beginning in March, 20 officers will be added to the South Central patrol division and shifts will increase from three to six.

“That'll keep the people away that want to commit crime if they see the police out here more often,” Casteel said.

“DPD is a little shorthanded right now,” Resendez said. “The city is working on it, DPD is working on it. We voted to increase pay for officers but I really think that our community could benefit from additional officers.”

Resendez doesn’t think the chief’s crime reduction plan goes far enough, but says he supports the chief so the city can succeed.