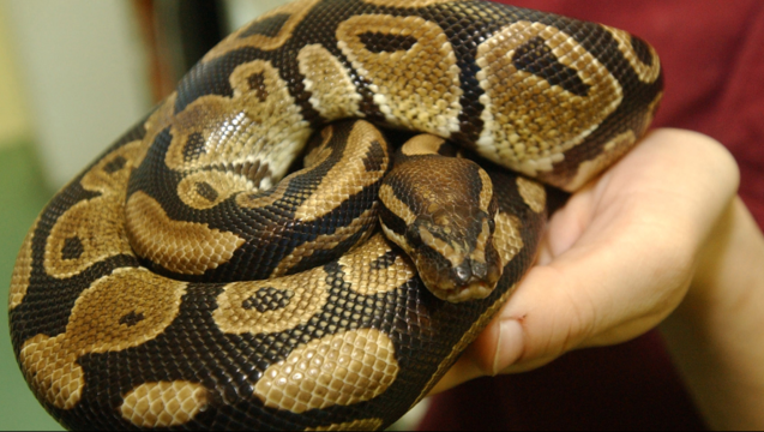 SIOUX FALLS, S.D. (AP) - A man who was fined for allowing his pet snake to slither freely in a South Dakota park said an animal control officer suggested he use a leash to restrain the reptile.

Jerry Kimball said he initially thought the recommendation was a joke because it was April Fool's Day when he was fined $190 and ticketed last week for "animals running at large," told the Argus Leader (http://argusne.ws/2oMstxK ).

"He was literally asking me to put a rope around my snake," Kimball said. "I was like, 'Dude, no.' I was dumbfounded."

Kimball was approached by the officer after a woman complained that his Fire Bee Ball Python was roaming freely at Falls Park in Sioux Falls.

Animal Control Supervisor Julie DeJong said a city ordinance requires all pets to be leashed or restrained in public. She said pet snakes can be held or kept in a container to comply.

"If it's in public and it's not on a leash, it's at large. The ordinance doesn't really distinguish between animals," she said.

DeJong added that snake lovers should be more sensitive to the aversion many people feel toward the animal. While non-venomous snakes are legal to own, not all park visitors will welcome a python in a park.

But Kimball said he considers it his mission to rid the public's fear of snakes.

"That's my purpose in life: To let people know that snakes aren't killers," he said. "What better way to give back than to help people understand these misunderstood creatures?"

Kimball said he plans to fight the ticket in court.