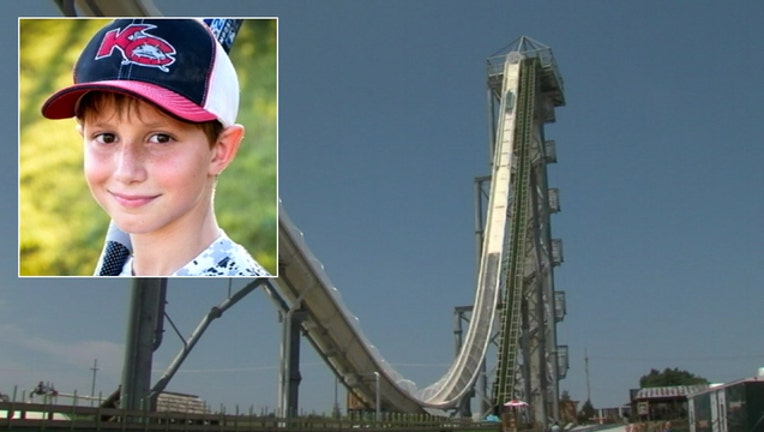 KANSAS CITY, Kan. - A 10-year-old boy was decapitated as he rode a 168-foot tall waterslide at a water park in Kansas, a person familiar with the investigation said Wednesday.

The person, who spoke on condition of anonymity because the person is not authorized to speak about the boy's death, told The Associated Press that Caleb Schwab was decapitated Sunday on the "Verruckt" raft ride at the Schlitterbahn WaterPark in Kansas City, Kansas.

Caleb, the son of a Kansas lawmaker, was in a raft with two women who were not related to him when he was killed. The women were treated for facial injuries.

A spokeswoman for the waterpark on Wednesday declined to discuss the circumstances of Caleb's death. The Guinness World Records has certified the ride as the tallest in the world.

At least two people who recently rode on "Verruckt" — German for "insane" — have said nylon shoulder straps came loose during the ride. It's unclear whether the straps played any role in Caleb's death. Police and Schlitterbahn have not provided any other details.

The park said Tuesday that "a limited portion" of the park would reopen Wednesday, but that "Verruckt" will be closed for the rest of the season.

"Verruckt" riders sit in multi-person rafts that begin with a steep drop, followed by a surge up a second hill before a 50-foot descent to a finishing pool. Each "Verruckt" rider must be at least 54 inches tall, and the combined body weight of the riders on each raft is limited to 400 to 550 pounds.

Riders are harnessed in with two nylon seatbelt-like straps — one that crosses the rider's lap, the other stretching diagonally like a car shoulder seatbelt. Each strap is held in place by long Velcro-style straps, not by buckles. Riders also hang on to ropes inside the raft.

Ken Martin, a Richmond, Virginia-based amusement park safety consultant, questioned whether the straps were appropriate, suggesting that a more solid restraint system that fits over the body — similar to those used in roller coasters — may have been better.

In early tests, rafts carrying sandbags flew off the slide, prompting engineers to tear down half the ride and reconfigure some angles. A promotional video about building the slide includes footage of two men riding a raft down a half size test model and going slightly airborne as it crests the top of the first big hill.

"I think ... they figured since stuff was flying out, we better do something to keep people from flying out," said Martin, who has not seen or tested the ride. "I think we have a serious issue with the restraint system. Period."

Jon Rust, a professor of textile engineering at North Carolina State University, said the material used on the straps, commonly called hook and loop, isn't designed to keep a person in the seat. It also can degrade with use.

"It's got to be used in a safe manner, and that doesn't include stopping someone's fall or preventing someone's ejection," Rust said.

Paul Oberhauser told television station KCTV that his shoulder restraint "busted loose" on his Verruckt raft July 26. The Nebraska man said he "just held on," and a video shot by his wife shows the strap loose at the ride's end. Oberhauser said he reported the matter to park workers.

Kenneth Conrad told WDAF-TV that during his trip down the waterslide last year with a friend, the friend's shoulder strap came "completely off." Conrad's wife snapped a photo at the end of the ride showing the strap missing. Conrad didn't file a complaint with the park.

Police are investigating the death as a criminal case although police spokesman Cameron Morgan said Tuesday that designation did not mean they suspect foul play.

Schlitterbahn in Kansas City has been sued for negligence at least three times — all in 2014 — though none of those legal actions involved the waterslide. Two lawsuits involved mishaps on the 3,000-foot King Kaw inner tube ride in man-made rapids and the third involved a man who said he caught his toe on a surfing ride and fell on his face. All of the cases were settled out of court for undisclosed sums.

Caleb's parents — Republican state Rep. Scott Schwab and his wife, Michele — have requested privacy and have not spoken publicly since the death of Caleb, whose funeral is Friday.

Verruckt's 2014 opening repeatedly was delayed, though the operators didn't explain why. Two media sneak preview days in 2014 were canceled because of problems with a conveyor system that hauls the 100-pound rafts to the top.

Kansas statutes governing amusement rides don't specifically mention waterslides. State law leaves it to the Kansas Department of Labor to adopt rules and regulations relating to certification and inspection of rides, adding that a permanent amusement ride must be scrutinized at least once a year by "a qualified inspector."

Regulations require only that owners of permanent amusement rides retain records for a year and rides are randomly selected quarterly for a records audit.

Documents released Tuesday by the state department showed that in June 2012, a records audit found that the park was not maintaining records of testing for current and previous years. The report said that instead of such testing, "visual inspections are conducted annually and daily." There was no record of a state response, and the audit was marked "pass."

There were no indications of further records audits, and department officials did not immediately answer questions about why that was so.