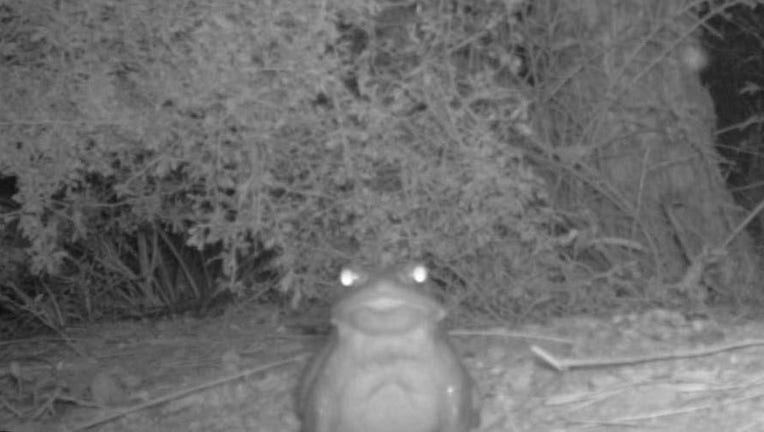 As tempting as it may be, the National Park Service does not want visitors to lick the Sonoran Desert toad.

The toad, also known as the Colorado River toad, is one of the largest found in North America — measuring nearly 7 inches, according to the park service. It also has a "weak, low-pitched" sound.

But most notably, the toad secretes a potent toxin that can make people sick if they handle the animal or get the poison in their mouth. Last week, the park service warned visitors to use caution around the amphibian.

"As we say with most things you come across in a national park, whether it be a banana slug, unfamiliar mushroom, or a large toad with glowing eyes in the dead of night, please refrain from licking," the National Park Service said.

The Sonoran Desert toad is often found near permanent springs, reservoirs, and streams in Mexico and in parts of Arizona, California, Colorado, and New Mexico. Despite the noted risk, some are drawn to the toad’s toxins that contain a psychedelic chemical called 5-MeO-DMT.

The practice of smoking toad venom has gained traction in recent years, with well-known figures like Mike Tyson sharing his experiences and Hunter Biden, the son of President Joe Biden, having written about it as a form of addiction treatment.

In New Mexico, the species is even considered threatened due to "collectors that want to use the animal for drug use," among other factors, the state's Department of Game & Fish said.

In California, the toad is classified as endangered. Possessing the toad’s poison, called bufotenin, is illegal in the state, according to the Oakland Zoo.

The liquid is extracted from the toad’s glands and then dried into a paste. This paste is then smoked, and users soon begin a hallucinatory experience.

"The experience is going to start within 10 to 30 seconds and then you're going to be physically incapacitated for 20 to 30 minutes," Alan Davis, a Johns Hopkins psychedelics researcher, previously explained in Johns Hopkins Magazine.

What is psilocybin, or 'magic mushrooms?'

The medicinal use of hallucinogenic mushrooms is making inroads in U.S. states as many advocate for the therapeutic value of psychedelic drugs.

Many refer to the drug's effects as "indescribable," according to Johns Hopkins Magazine. For some, perception of time, vision, and sound can be distorted. In less than an hour, the trip is over, leaving its users with "a new, mood-altering perspective on their lives," Johns Hopkins Magazine states.

Toad venom has also been the subject of research as a potential treatment for addiction disorder, depression, and anxiety, similar to research on the potential therapeutic qualities of psilocybin — the psychoactive ingredient of "magic mushrooms."

But U.S. government classifies 5-MeO-DMT as a Schedule 1 drug with no accepted medical use, and researchers must obtain special approval to conduct such studies.

Meanwhile, the Sonoran desert toad’s toxins are also dangerous for animals. The toxins are strong enough to kill a full-grown dog that picks up or mouths the toad, according to the Arizona-Sonora Desert Museum.

"Symptoms of intoxication are excessive salivation, irregular heartbeat and gait, and pawing at the mouth," the museum says. "If a dog displays any of these symptoms, use a garden hose to rinse its mouth from back to front and consult a veterinarian."