The Chalk Mountain wildfire has now burned more than 6,700 acres, with just 10% containment.

Sixteen homes have been destroyed.

Governor Greg Abbott was in Glen Rose Saturday morning to give updates on the fire situation.

"You gotta find the positive in the little things and chase that," 25-year-old Ralph Darch Jr. said.

Darch knows something about making the best of a devastating situation. He said, at the age of 6, a fire destroyed his family’s home. Then at the age of 20, he lost a leg.

"I was riding a motorcycle to work and a guy ran a stop sign and hit me," he said.

Now, Darch lost another home. One he and his girlfriend lived at on Glen Canon Ranch in Somervell County. It’s where he works as a ranch manager. Now, wildfires leave them with next to nothing.

"It’s sad, yes, but like he said, it happens and there’s nothing you can do about it. All we can do is just grow from here," Carleigh Funk added.

The family lost nearly everything because of the wildfires, from smaller objects, like a coat rack, to larger items, like vehicles.

They left their home with nothing but the clothes on their back, and they said as they were driving off, in the distance, they could see smoke rising and they realized everything was going to be lost.

"There have been 60 homes evacuated, about 40 homes that were threatened, 16 homes destroyed, and five that were damaged," Gov. Abbott said. "The best news is that no lives have been lost." 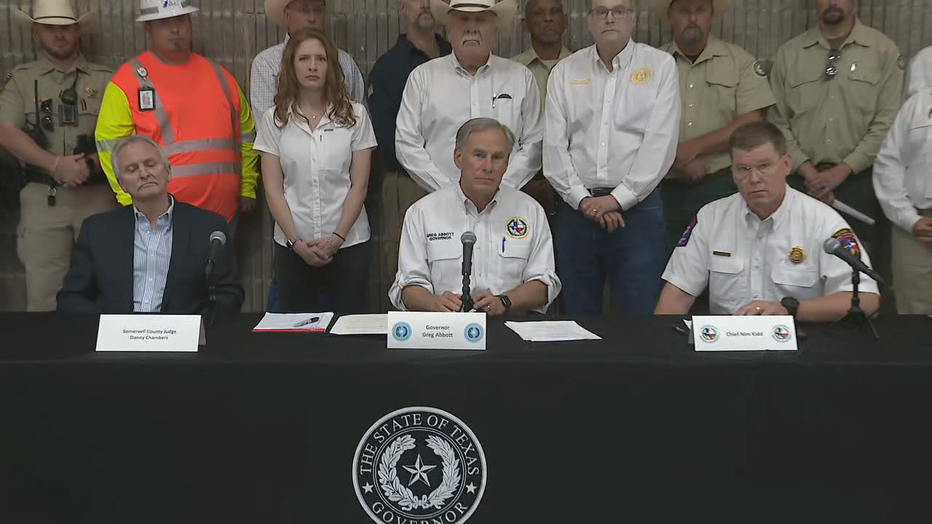 Fire continues to burn there.

"It is at 10% containment, but what that means is, right now, they are doing heavy mop-ups all within the lines around here," explained Robert Duggan.

"I’ve got to tell you, weather conditions over the next couple days are going to be trying to make that fire escape, but the local firefighters that are here and the support will do everything they can to keep it inside the current perimeter," Texas Division of Emergency Management Chief Nim Kidd said.

Texas officials said there have been more than 200 wildfires across the state throughout the past seven days.

Though the Chalk Mountain wildfire is the largest active fire.

Fortunately, Darch and Funk have a place to stay as they prepare for the daunting task of rebuilding.

"Now, I’m just grateful to have a roof over our head and our dogs are safe and we have so many friends and family. His family stepped up and was here the whole time," Funk said.

"Maybe I’ll never be that rich guy that retires early and has everything in the world, but it’s not what you have, it’s how you treat what you have," he said.

And as the smoke clears, he knows he and his loved ones will be just fine.