An attempt by Dallas Police Chief Renee Hall to talk with protesters did not go as planned. Some in the crowd called for defunding the Dallas Police Department and even the chief's resignation.

DALLAS - Dallas Police Chief Renee Hall spoke to protesters Sunday outside city hall but cut her speech short as people in the crowd called on her to resign.

The protesters made their way through Downtown Dallas before going to hear Hall speak outside city hall.

Chief Hall spoke to protesters, hoping to have a conversation about needed changes in policing. Instead, the protesters wouldn’t let her talk.

“I was on my knees with my hands up and was tear gassed,” one protester said. 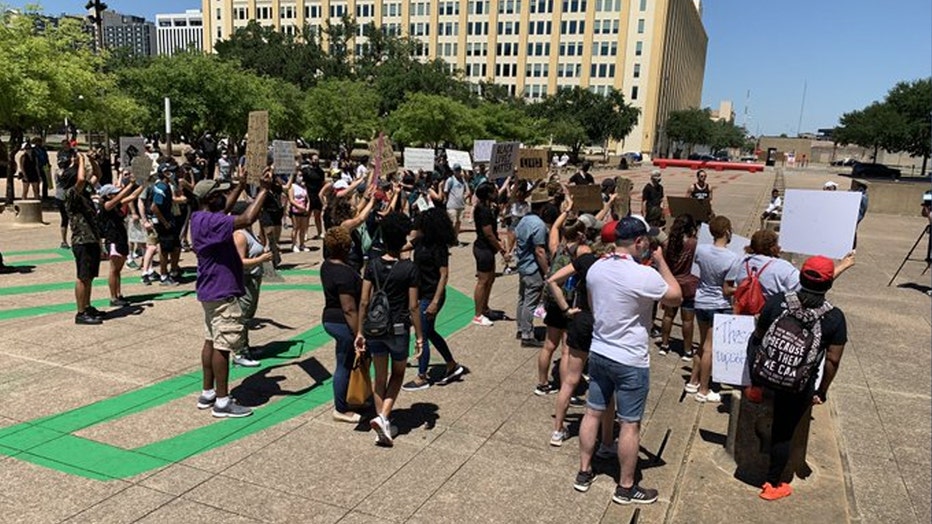 For more than 14 days, protesters have marched calling for changes in police policy. Some are even calling for the defunding of the Dallas Police Department.

Chief Hall ended her talk with protesters but spoke to FOX 4 about the anger directed towards her.

“Defunding the police department means keeping the right to safety and protection away from the tax paying citizens,” she said. “The city needs the police. Are there things that needs to be done? Yes there are, but defunding the police is not the answer.”

The protest was led by United Justice League. Zachariah Manning was the organizer.

“Citizens are angry at having things done to them that should not have occurred,” Manning said.

Parents were in the crowd of protesters. Some brought their children with them.

“They see it, they know what to do, they don't want to lose their fathers and mothers the way they have been dying now. I don't want them to be afraid of the police, there are some good police out there,” Ashley Bryant said.

“It makes me a little worried. I try not to pay too much attention to it, because if I do, I will cry sometimes, because I don't want that to happen to anyone else in this world,” she said.

Chief Hall said they will soon release video of the incident with protesters on the Margaret Hunt Hill Bridge, and said that if police are in the wrong, they will own it.