Most North Texans have gone on with their lives after last week's winter storms, but some people are still living in survival mode.

GARLAND, Texas - Some people in Garland are still without water even though the winter storm is long gone.

And many say they are getting by thanks to people who care.

Most North Texans have gone on with their lives, but some people are still living in survival mode.

Getting back on track is proving to be anything but easy for them.

Bottled water in bulk is being given out to a steady stream of cars at the Garland Central Library location thanks to the city and people making donations.

One man took a train, a bus, then walked the rest of the way to get clean water.

Others, like Alicia Rivera, said that even nearby stores are running out.

"It’s been hard with both of them, with the kids," she added.

Some residents at The Arts Apartments at Broadway Commons know the struggle is real, as they’ve been without water for a week.

Porta potties are now on-site to offer a little relief. 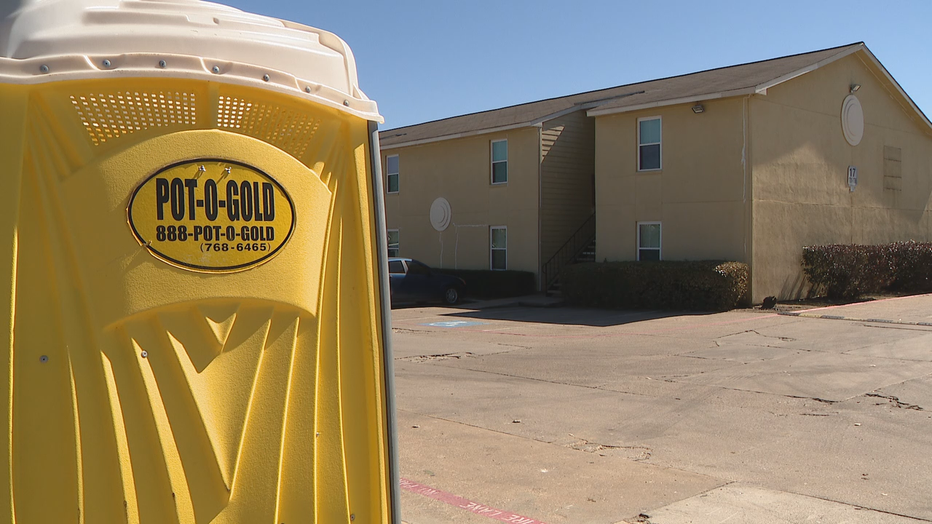 "We had to get pool water for the bathroom, like to flush. We had to go all the way to the office to get water for like showering, to cook," Maria Maruffo said.

The city estimates there are still 1,000-1,500 people in various apartment buildings without water.

The city can run water to the buildings, but the water is shut off because of multiple burst pipes across complexes.

Getting them all fixed, and finding the scarcely available parts to do so, takes time.

"It was coming down like this and water was just soaking wet inside this closet," she said.

She and her three boys live in a part of the complex that had water restored, but she said the carpet is still damp as she waits for repairs to a burst pipe.

"It just came out all through here, and like his shoes were soaking wet. We had books and toys and stuff on the floor and it was all soaking wet," she said.

Still, others are in the next stage of recovery.

"We have three children at home. Believe me, it’s sad to hear them tell us, ‘We want milk, we want cereal.’ How?" Tony Uribe said.

"[Tuesday], we had 122 families come in requesting assistance," said Pam Swendig, with Good Samaritans of Garland

"With my limited income I pay my rent, electric and maybe a few other things, so this helps tremendously," Rachel Lopez said.