More than two dozen North Texas school districts still have money remaining from the 2019 grant, according to the latest numbers from the Texas Education Agency.

DALLAS - In the wake of the Uvalde school shooting, Texas leaders agreed this week to dedicate $100 million toward school security and mental health.

It's the same amount the state allocated to schools after the 2018 Santa Fe school shooting.

However, utilizing those funds has been a challenge for some school districts.

More than two dozen North Texas school districts still have money remaining from the 2019 grant, according to the latest numbers from the Texas Education Agency.

After FOX 4 started asking questions, the TEA extended the deadline for districts to utilize the funds by one year. 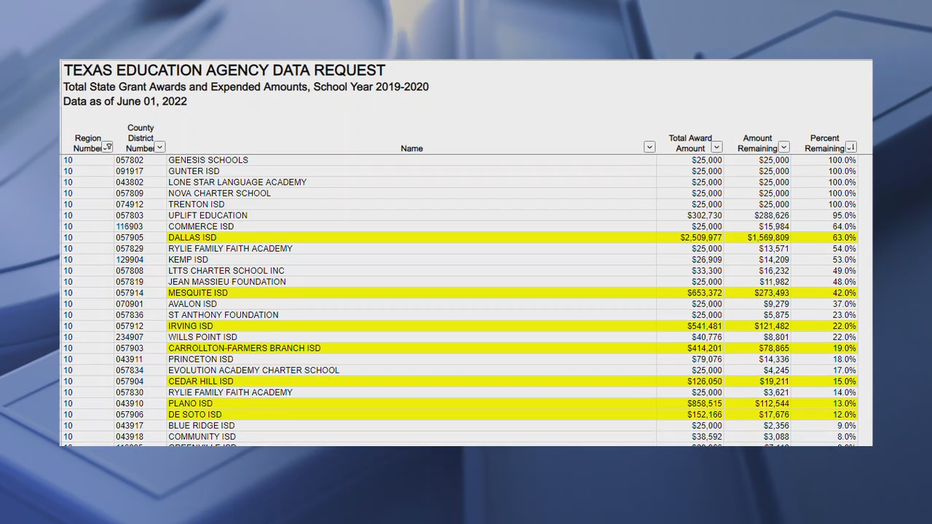 Sunnyvale ISD Superintendent Doug Williams says when the state awarded $100 million to 1,100 school districts. His district quickly put its limited portion to use.

"It allowed us to harden school entrances and build what are controlled vestibules, or man traps, so any school you enter you have to be buzzed in at two spots," Williams said.

But FOX 4 obtained numbers from the TEA showing as of June 1 that dozens of North Texas school districts still had thousands of unused dollars.

Dallas ISD had the largest unused amount in North Texas at $1.5 million, which is 63% of its allotted funds.

The district said it "anticipates submitting a reimbursement request for the remaining grant expenditures in July."

That would have missed the TEA's deadline.

But on Thursday, the agency announced it has extended the end date for all grantees that have funds remaining. That money was allocated after the Santa Fe shooting in 2018.

Now, in the wake of Uvalde, state leaders are preparing to move another $100 million toward school security with more specific detail about how they want the dollars used.

Lt. Gov. Dan Patrick wants nearly half of the money to go toward bullet resistant shields for school police officers and $17 million for technology that allows school employees to silently alert police during emergencies. Another $10 million would go toward mental health services.

Williams says he would like to see the state fund a school resource officer or marshal for every school. The cost for that would be about $100 per student.

"If an armed officer is on campus, our opinion is always that the amount of damage a shooter can do is minimized," he said.

It's a need Lake Worth ISD echoed this week at a news conference where the district announced a partnership to add one additional officer.

"We've got to take a holistic look at why this happened and make sure what happened in Uvalde was the last one for our state," Williams said.