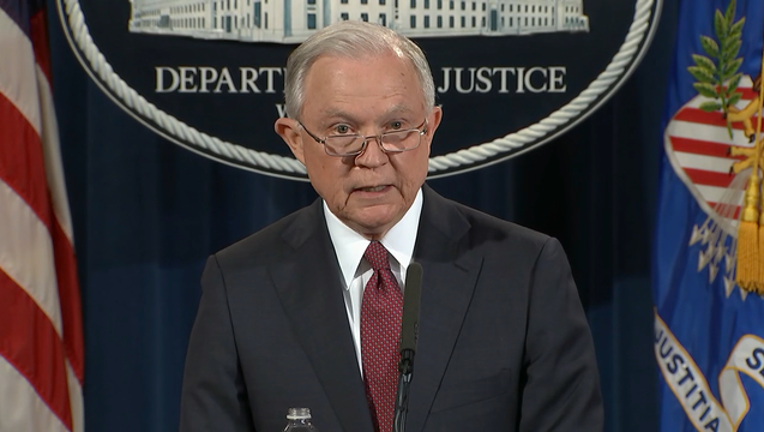 WASHINGTON (AP) - Attorney General Jeff Sessions said Thursday he won't immediately appoint a new special counsel to investigate a number of Republican grievances involving the FBI and Justice Department, despite mounting pressure from members of his own party.

Sessions, in a letter to three Republican committee leaders, reiterated that he had directed a senior federal prosecutor, Utah's U.S. attorney John W. Huber, to evaluate "certain issues," including whether such an appointment is necessary. Huber's review is ongoing, and Sessions said he gets regular updates.

The letter is likely to unnerve Republican lawmakers, who have called for multiple special counsels to study allegations of misconduct in some of the FBI's highest profile, most politically charged investigations. Most recently, they've demanded a special counsel to take a broad look at whether Justice Department or FBI employees were biased during their now-closed probe of Hillary Clinton's use of a private email server, and as they began investigating Trump campaign ties to Russian meddling in the 2016 election.

In a statement released Thursday night, House Judiciary Chairman Robert Goodlatte and House Oversight and Government Reform Chairman Trey Gowdy said they were "encouraged" that Huber was tapped to investigate the issues.

"While we continue to believe the appointment of a second special counsel is necessary, this is a step in the right direction," they said.

Democrats say the allegations are an effort to distract from and undermine the separate work of special counsel Robert Mueller as his team's Russia investigation intensifies.

Sessions' letter comes a day after the Justice Department's inspector general announced that, at Sessions' urging, it would review whether law enforcement officials abused their surveillance powers in seeking permission to monitor the communications of former Trump campaign adviser Carter Page.

Sessions' referral of the allegations to the inspector general enraged President Donald Trump, who said Sessions should have ordered is own investigation. But in his letter to lawmakers, Sessions reminded that the inspector general's office can and often does refer matters for prosecution.

And he said the Justice Department has proven capable of handling "high-profile, resource-intensive matters" without the rare appointment of a special counsel.