Senate Judiciary Committee holds hearing on police use of force

At the Senate hearing on Tuesday, the debate among the senators reflected the broader reckoning unfolding nationwide as Americans come to grips with the country's legacy of racism and its modern police structure.

WASHINGTON - The Senate majority at stake, Republicans are abruptly shifting priorities to focus on policing changes as Congress rushes to respond to nationwide protests over the killings of black Americans by law enforcement officers.

The GOP senators welcomed President Donald Trump's executive actions Tuesday to create a database of police misconduct. They gaveled open a Judiciary Committee hearing on "police use of force and community relations." And on Wednesday, they are set to unveil their own package of proposed changes to police practices and accountability.

It's the most swift, and extensive, Republican review of law enforcement in decades, a stunning election-year turn of events after George Floyd's May 25 death in Minnesota. Democrats warn it does not go nearly far enough to meet the moment.

"We are at the point in the United States where we are at a crossroads," said Sen. Cory Booker, D-N.J., a co-author of a sweeping Democratic police overhaul package, as he led colleagues in a series of speeches in the Senate.

Booker said the choice is between "meaningful reforms and symbolic measures that will do nothing to save people's lives."

With the House set to pass the Democratic package, and Republicans rushing to vote on the GOP plan in the Senate as soon as next week, the two proposals are on a collision course as Congress seeks to show voters it hears the demonstrators marching in the streets.

Trump vowed a "big moment" if lawmakers could act. At a Rose Garden event for his executive actions, he declared himself "committed to working with Congress on additional measures."

In the weeks since Floyd's death, another black American, 27-year-old Rayshard Brooks, was shot and killed Saturday night by police in Atlanta. 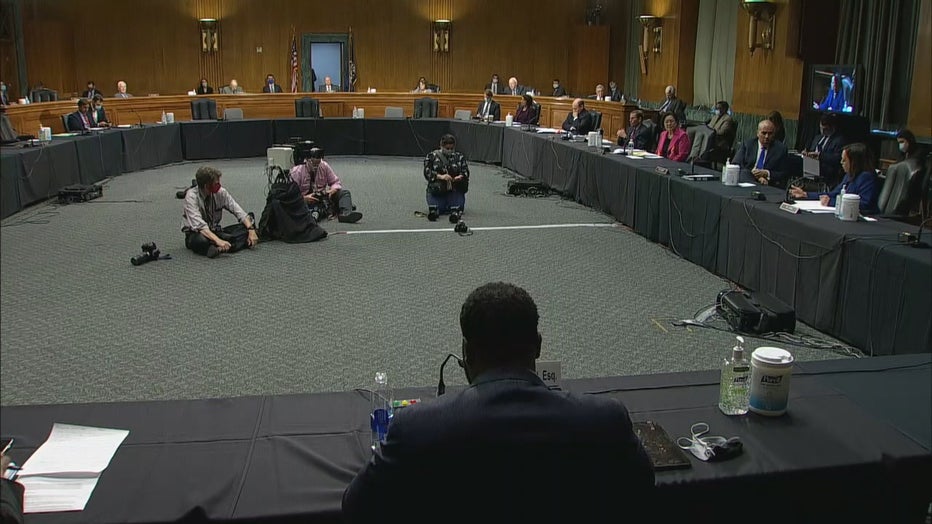 At the Senate hearing on Tuesday, the debate among the senators reflected the broader reckoning unfolding nationwide as Americans come to grips with the country's legacy of racism and its modern police structure.

The committee chairman, Sen. Lindsey Graham, R-S.C., shared his own experiences of rarely being pulled over by the police and never being afraid if he was -- in sharp contrast to Scott's own stories as a black man being stopped by law enforcement officers even as he entered the U.S. Capitol.

"Hopefully we can all understand that problem and fix it. But it is a problem," Graham said.

Sen. Kamala Harris, D-Calif., a co-author of the Democrats' bill, said it's the responsibility of all senators to understand the nation's racial history.

A former attorney general in California, Harris said "more police" does not equal "more safety" especially as teachers and others compete for scarce local funding.

"We must re-imagine what public safety looks like," Harris said.

Facing a panel of civil rights and law enforcement leaders, Republican Sen. John Cornyn of Texas engaged in a frank exchange with Vanita Gupta, the president and CEO of the Leadership Conference of Civil and Human Rights.

"Do you believe that, basically, all Americans are racists?" Cornyn asked at one point.

"I think we all have implicit bias, and racial bias, yes I do," replied Gupta, a former acting assistant attorney general of the civil rights division in the Justice Department.

"And I think we are an amazing country that strives to be better every single day," she said.

Later, GOP Sen. Joni Ernst of Iowa, one of the senators up for reelection in fall, acknowledged it's a "very uncomfortable conversation we're having" about race and law enforcement.

But she said it's one that Congress must have after countless Americans watched the video of Floyd's death at the hands of police.