In a discussion with U.S. Senator John Cornyn. and other law enforcement officials on Friday, Police Chief Renee Hall says her department is also working on increasing transparency and other new policies.

DALLAS - The Dallas Police Department said it respects a judge's decision, temporarily stopping officers from certain use of force tactics on protestors.

In a discussion with U.S. Senator John Cornyn. and other law enforcement officials on Friday, Police Chief Renee Hall says her department is also working on increasing transparency and other new policies. 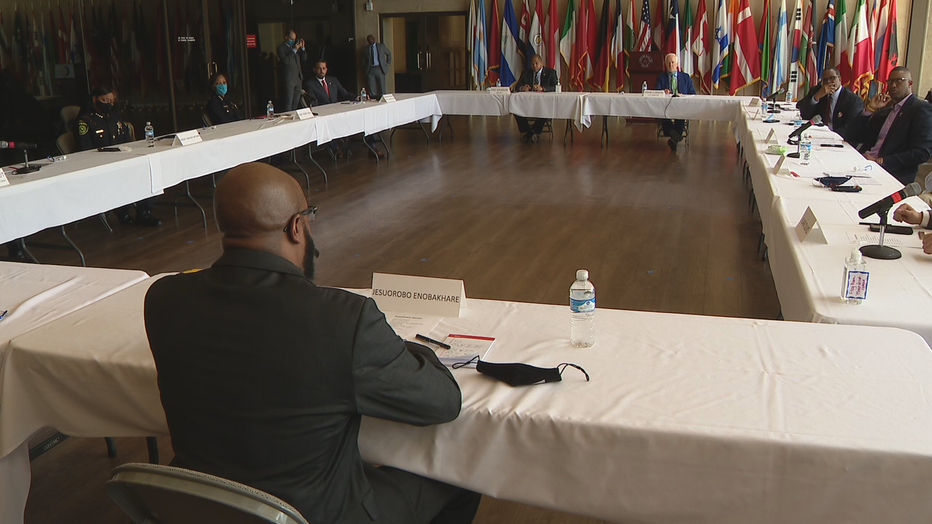 Hall says the police department will comply with a federal judge’s ruling that temporarily prohibits the use of “less lethal” weapons, like tear gas, smoke bombs, flash bangs, pepper-balls, mace and other chemical agents and foam bullets during peaceful protests.

Organizers of a Friday protest outside Dallas City Hall believe the weapons should only be used if one’s life is on the line.

The ruling comes after two protestors, Tasia Williams and Vincent Doyle, sued the city, Chief Hall and a group of officers, claiming they were injured by the “less lethal” tactics and filed for the temporary injunction.

Chief Hall did not address the injunction. But in a statement, Dallas PD says it respects the ruling and will comply. And in the coming days and months, it’ll implement new policies to address police brutality and systemic racism.

Chief Hall provided a report to the city manager Friday regarding decisions made during protests, including the decision to detain nearly 700 protesters who blocked the Margaret Hunt Hill Bridge early last week after police told them not to go on the bridge. Hall later dropped the charges against the protesters.

The injunction is in effect until Sept. 9, unless modified by the court. Many believe it’s a start but that there are still plenty of barriers to be broken down between both sides of policing and communities of color.

Earlier inside city hall, local leaders inside were part of a roundtable discussion of policing hosted by Sen. Cornyn.

“Help me understand better about not only the problems, but also potential solutions,” Sen. Cornyn said.

“Everything someone does in law enforcement, it doesn’t matter if they’re in Portland, Maine or Los Angeles, California, it affects everyone wearing this uniform in policing,” Hall added. “We cannot afford to have systems in place that tie our hands. We have work to do.”

“I think what we have to do is we have to work on the training that we’re giving to our officers, in addition, we have to continue to be accountable to our community,” Dallas County Sheriff Marian Brown said.

“You have to take a stronger role in terms of the dynamics in Washington as it relates to the President’s rhetoric. It is going against everything we’re talking about in this room. You represent us, you represent me,” said Rene Martinez, with North Texas LULAC.

“This is going to take a lot longer,” said Jerusalem Assefa with We Are One.

“The miscommunication was way before the protest,” said Tigist Solomon with We Are One. “So that’s why these protests were happening.”

“I think a lot of our community suspects we have two different systems for justice in a sense, and I think that is true based on what I discovered since I’ve been the district attorney of Dallas County,” Dallas County DA John Creuzot said.

After listening intently, Sen. Cornyn assured those in the room he takes it all to heart, and will soon take it back to Washington.

“In many ways, it’s not a new story. This is, as the mayor said, this is the latest episode in a long story that started in the very origins of our country,” he said. “Some of you say this isn’t just a police issue and I think that’s right, because there seems to be a very different experience depending on where you come from, the color of your skin, whether you’re born into poverty or affluence, a very different experience.”

Sen. Cornyn floated the idea of federal guidelines for use of force best practices and a national registry for officers proven to have used excessive force.