FORT WORTH, Texas - The Department of Homeland Security has said there are no credible threats in the U.S. after Gen. Qassem Soleiman was killed in Baghdad, but there’s still a heightened awareness about

The Department of Homeland Security has said there are no credible threats in the U.S. after Gen. Qassem Soleiman was killed in Baghdad, but there’s still a heightened awareness about security, especially at crowded events.

That includes the Lockheed Martin Armed Forces Bowl in Fort Worth on Saturday.

The game, sponsored by a defense contractor, draws tens of thousands of service members.

There are also a lot of military tributes planned for the game.

Lockheed Martin will have a F-35 flyover, 100 Purple Heart recipients will be honored on the field, military families will be reunited, and more than a 100 recruits will be inducted into the armed forces.

The most important thing is that the large military crowd is kept safe.

There are 20,000 members of our armed forces who are confirmed to attend Saturday’s Armed Forces Bowl between Southern Mississippi and Tulane at Amon G. Carter Stadium in Fort Worth.

Tanks, a Marine helicopter, and a Thunderbird are already parked and ready for the “Bowl for the Brave,” which draws a crowd of mostly active military members and veterans because their tickets are free. 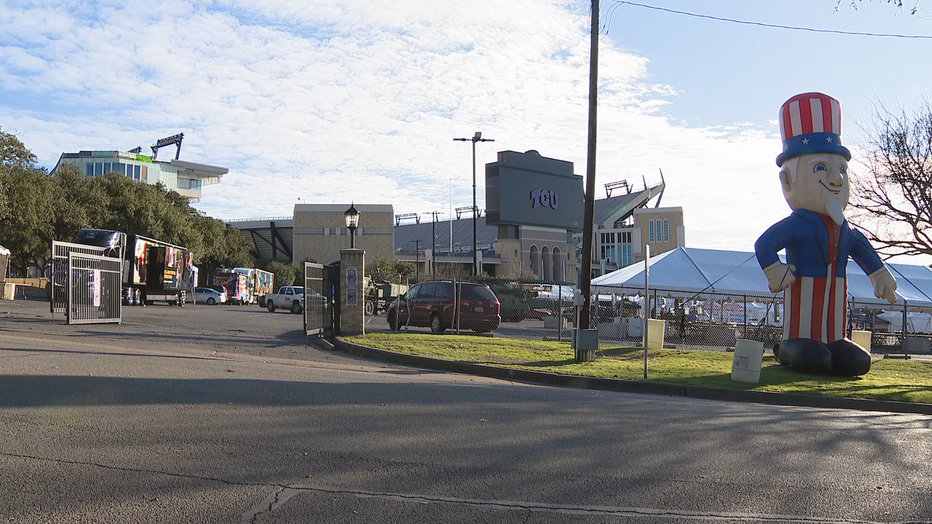 “Lockheed Martin buses in maybe 1,000 active duty members from a three to four hour radius of all the bases,” said Brant Ringler, executive director of the Armed Forces Bowl.

It’s meant to be a tribute to the military. A time for them to enjoy football and forget about everything else going on in the world.

This bowl has an added layer of security to protect the military crowd, especially as the game is played within days of the U.S. airstrike in Baghdad that killed a top Iranian military commander.

“There’s usually a component of security to every bowl game,” Ringler added. “I think ours is a little higher just based on the fact that we have the armed forces involved and we have a lot of dignitaries here that come.”

Fort Worth police said their department is not operating at a heightened level, but working with local and federal agencies to provide security.

A statement from Fort Worth PD's intelligence unit states: "We can assure the public that our officers are dedicated to the safety of our citizens and will take all measures to ensure that safety."

“TCU has their own security force, Fort Worth PD, we have Homeland Security, we have the FBI,” Ringler explained. “We work with all of them, they all work in conjunction with each other and are communicating and making sure this is one of the safety places in Fort Worth.”

There is a standard clear bag policy in effect for the game on Saturday, which starts at 10:30 a.m.