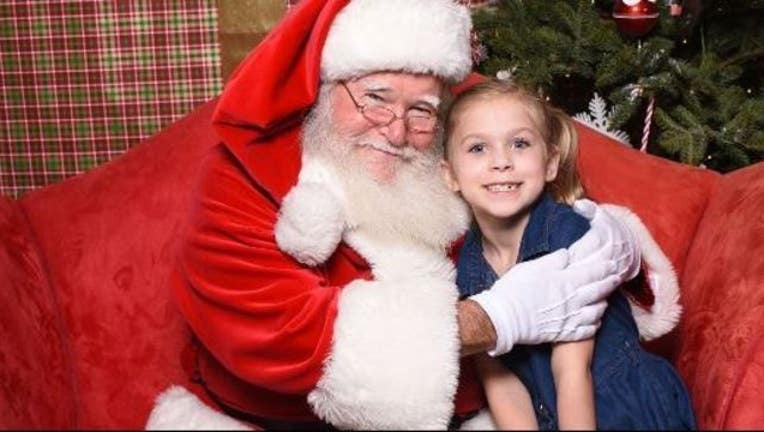 WALNUT CREEK, Calif. (KTVU) - For much of her childhood, Sosie Horwitz has often struggled communicating with people at the grocery store, restaurants and sometimes with other kids she meets at the park.

That's because the 7-year-old Hayward, Calif. girl is deaf, and not everyone else she meets knows American Sign Language.

But Sosie was lucky enough when she was a baby to meet a special Santa at the Walnut Creek Broadway Plaza who understood her right from the very start.

"It's better to have a Santa who signs," she said through an interpreter. "Because then I don't have to say I don't understand."

And this year was no different. The two communicated as they have done every year, talking in ASL, sharing memories and laughing at jokes. Of course, there was her Christmas wish. And Santa understood right away that Sosie wanted a new Lego set.

"It's really important due to the fact that not everybody can use ASL," Santa said. "I just happen to know it because my parents were deaf."

Sosie's parents are deaf, too. Her mother, Maureen Horwitz, said they randomly stumbled across this Santa  at the mall when their daughter was a baby.

"Her aunt and I went shopping and we saw Santa Claus and I thought, let's get a picture of her with Santa," Maureen Horwitz said through an ASL interpreter. "And he started signing, 'Are you deaf?' And I said, 'Ya I'm deaf.' And that's how it happened. Just happenstance."

Since then, the Horwitz family has made a point to see this Santa every year.

Her mom added: "For me as a mom it's important to me to have my daughter to have some good self-esteem. So when I see a signing Santa Claus with her it makes me feel good. She can grow up feeling, 'There's nothing wrong with me.' "

Over time, word has spread about the sign-language Santa. Just a few weeks ago, a large group of children with hearing loss made a special appointment to see him.

"When it first started there was just one or two. Then it just grew," Santa said. "Now there's about 30 or 40 that come here every year."

The fact that Santa can sign is nearly a miracle for Maureen Horwitz, who remembers being a child around Christmas, and being unable to communicate with the Santas she met.

"There was a lot of like, 'Santa's magic. And he knows all these languages,' " she said, gesturing with great excitement. "But he didn't know sign and that always puzzled me growing up. So seeing this is really nice having, a Santa who can sign."