Biden asks Congress for another $33 billion in Ukraine aid

President Joe Biden asked Congress for an additional $33 billion to help Ukraine fend off Russia's invasion in remarks on April 28, 2022.

KYIV, Ukraine - Ukrainian President Volodymyr Zelenskyy accused Russia of trying to humiliate the United Nations by raining missiles on Kyiv during a visit to the city by the U.N. chief, a deadly attack that shattered weeks of relative calm in the capital.

Ukraine’s forces, meanwhile, fought to hold off Russian attempts to advance in the south and east, Zelenskyy reported. And U.N.-backed efforts to arrange safe passage for residents trapped in the ruins of Mariupol continued. Numerous previous attempts to evacuate civilians have fallen through.

Russia pounded targets all over Ukraine on Thursday, hitting a residential high-rise and another building in Kyiv just as life seemed to be getting a little closer to normal. U.S.-funded broadcaster Radio Free Europe/Radio Liberty said one of its journalists was killed.

Separately, a former U.S. Marine was killed while fighting alongside Ukrainian forces, relatives said in what would be the war's first known death of an American in combat. The U.S. has not confirmed the report. At least two other foreigners fighting on the Ukrainian side, one from Britain and the other from Denmark, have also been killed.

In an apparent reference to the attack in Kyiv, Russia's military said it had destroyed "production buildings" at the Artem defense factory.

The bombardment came barely an hour after Zelenskyy held a news conference with U.N. Secretary-General António Guterres, who toured some of the destruction in and around Kyiv and condemned attacks on civilians.

"This says a lot about Russia’s true attitude toward global institutions, about attempts of the Russian leadership to humiliate the U.N. and everything the organization represents," Zelenskyy said late Thursday in his nightly video address to the nation. "Therefore, it requires a correspondingly powerful response." 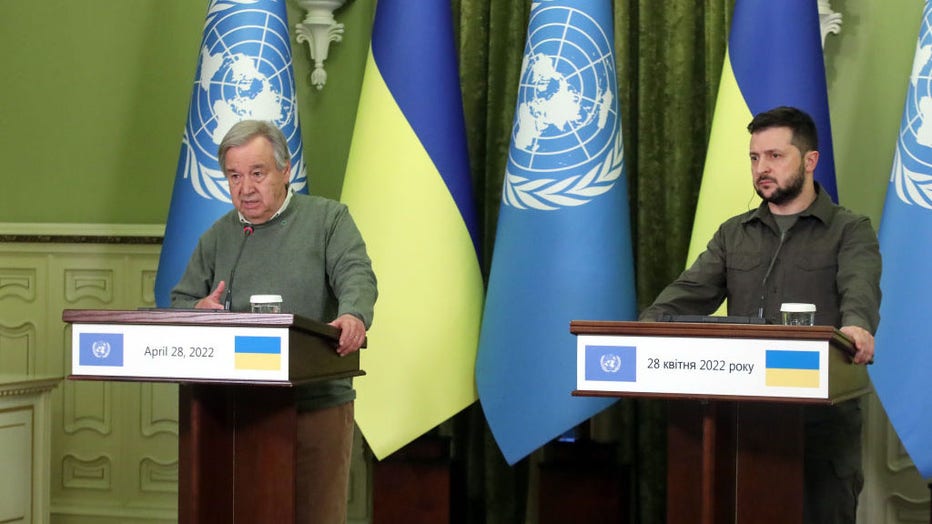 The strikes were the boldest Russian attack on the capital since Moscow’s forces retreated weeks ago following their failure to take the city. Russia is now pushing into the Donbas, the country's eastern industrial region, which the Kremlin says is its main objective.

Volodymyr Fesenko, a Ukrainian political analyst and head of the Kyiv-based Penta Center think tank, said the Kyiv attack carried a message: "Russia is sending a clear signal about its intention to continue the war despite the international pressure."

Getting a full picture of the unfolding battle in the east has been difficult because airstrikes and artillery barrages have made it extremely dangerous for reporters to move around. Both Ukraine and the Moscow-backed rebels fighting in the east also have introduced tight restrictions on reporting from the combat zone.

But so far, Russia’s troops and the separatist forces appear to have made only minor gains, and Britain’s Defense Ministry said those have been achieved at significant cost to the Kremlin's forces.

One aim of Guterres' visit was to secure the evacuation of people from the gutted southern port of Mariupol, including a shattered steelworks where an estimated 2,000 Ukrainian defenders and 1,000 civilians were holed up in the last major stronghold of resistance in the city.

The Soviet-era steel plant has a vast underground network of bunkers able to withstand airstrikes. But the situation has grown more dire after the Russians dropped "bunker busters" and other bombs.

"Locals who manage to leave Mariupol say it is hell, but when they leave this fortress, they say it is worse," said Mariupol Mayor Vadym Boichenko. "They are begging to get saved," he said, adding: "There, it’s not a matter of days, it’s a matter of hours."

About 100,000 people are believed trapped in the city with little water, food, heat or electricity. Ukraine has blamed the failure of previous evacuation attempts on continued Russian shelling.

This time, "we hope there’s a slight touch of humanity in the enemy," Boichenko said. 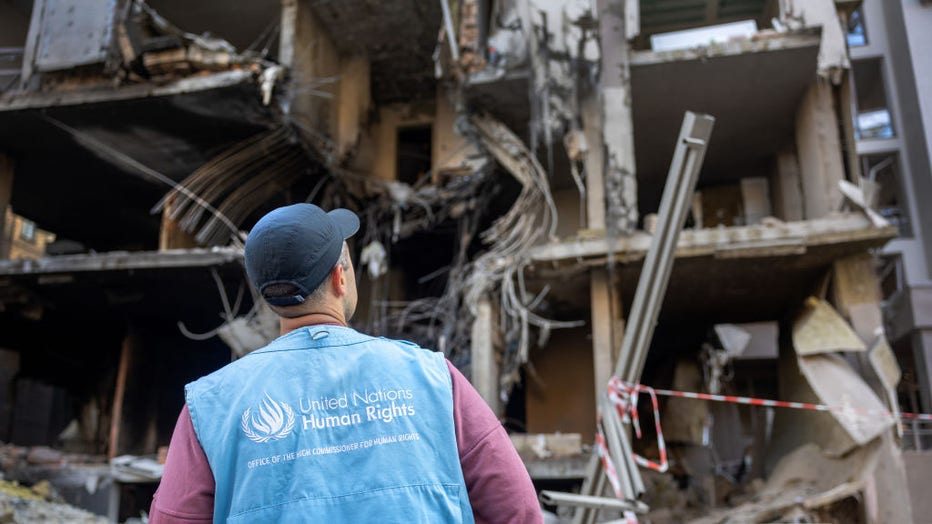 KYIV, UKRAINE - APRIL 29: A United Nations Human Rights monitor looks over damage the morning after a missile strike in the Shevchenkivskyi district on April 29, 2022, in Kyiv, Ukraine. (Photo by John Moore/Getty Images)

Two towns in central Ukraine's Dnipropetrovsk region were hit by Russian rockets on Friday, the regional governor said. There was no immediate word on casualties or damage.

Sirens, artillery fire and explosions could be heard from Kramatorsk to Sloviansk, two cities about 18 kilometers (11 miles) apart in the Donbas. Columns of smoke rose from the Sloviansk area and neighboring cities. At least one person was reported wounded in the shelling.

The governor of Russia’s Kursk region said that a border post came under mortar fire from Ukraine and that Russian border forces returned fire. He said there were no casualties on the Russian side.

"He wanted to go over because he believed in what Ukraine was fighting for," she said, "and he wanted to be a part of it to contain it there so it didn’t come here, and that maybe our American soldiers wouldn’t have to be involved in it."

The Marine Corps said Cancel served four years but was given a bad-conduct discharge and sentenced to five months' confinement for violating orders. No details on the offense were given.

In the wake of Thursday's missile attack in Kyiv, Radio Free Europe/Radio Liberty said the body of Vira Hyrych, a journalist who lived in one of the buildings, was found in the rubble. Ten people were wounded, at least one who lost a leg, according to emergency officials.

Radio Free Europe President Jamie Fly said the organization was "shocked and angered by the senseless nature of her death at home in a country and city she loved."

Kyiv had been relatively unscathed in recent weeks, and cafes and other businesses have started to reopen, while a growing numbers of people have been out and about, enjoying the spring weather.

Meanwhile, Ukrainian forces are cracking down on people accused of helping Russian troops. In the Kharkiv region alone, nearly 400 people have been detained under anti-collaboration laws enacted after Russia’s Feb. 24 invasion.

In Russia, the international sanctions imposed on the Kremlin over the invasion are squeezing the country. The Russian Central Bank said Russia’s economy is expected to contract by up to 10% this year, and the outlook is "extremely uncertain."

The terrible human cost of the war, which has driven more than 11 million Ukrainians from their homes, continues to climb.

In Lyman, a town in the Donbas, shells rained on Tatiana Matsegora’s home this week. Matsegora’s 14-year-old grandson, Igor, was pronounced dead after rescue workers drove him to the hospital. Her daughter was in serious condition, and her son-in-law was also killed.

"'Grandma, will I live?'" she said Igor asked her when they were in the basement, waiting for help. "I said that he would live. But look what happened: I betrayed him."

Associated Press journalists Jon Gambrell and Yuras Karmanau in Lviv, Mstyslav Chernov in Kharkiv, Yesica Fisch in Sloviansk, and AP staff around the world contributed to this report.