Roof torn off building at Fort Worth Stockyards during Monday storm

Part of the Fort Worth Stockyards shut down temporarily on Monday evening after strong winds from a thunderstorm ripped off part of a metal roof on Main Street.

FORT WORTH, Texas - Part of the Fort Worth Stockyards shut down temporarily on Monday evening after strong winds from a thunderstorm ripped off part of a metal roof on Main Street.

"I heard tin warping and making noise, so I stood right up and looked out the front door," he said. "The first thing I looked at was our old front porch here and it was fine."

But then Scott realized that metal sheeting had come from the building just a few feet away, which is home to his company’s warehouse.

The Fort Worth Fire Department got the call just before 5 p.m.

"Those pieces of metal flying at a high rate of speed can become unfortunately deadly," said Mike Drivdahl with Fort Worth Fire.

Firefighters had to pull several large pieces of the roof off of nearby parked cars. All of them were unoccupied at the time. 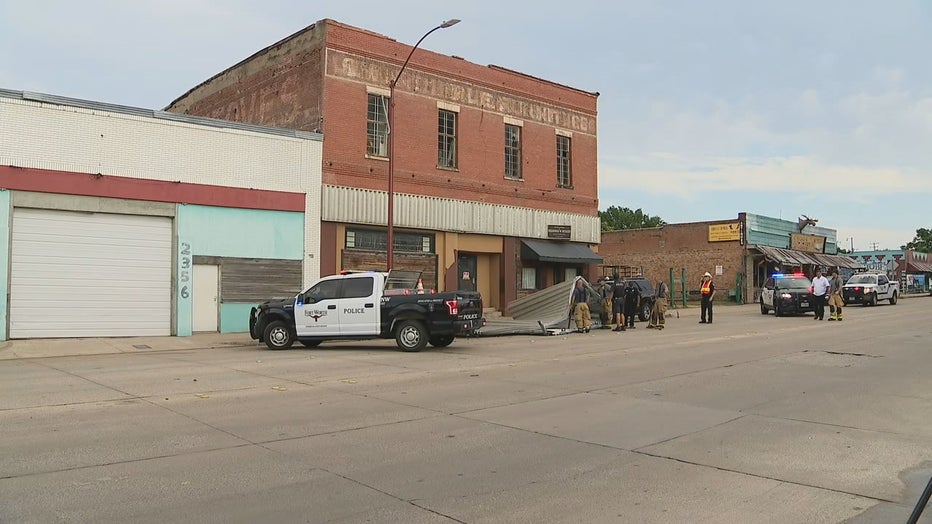 "The black SUV was covered and there were some across the street," Scott said.

Just around the corner, the Cowtown Coliseum closed early after a roof leak on the second floor caused minor flooding downstairs.

Gerald McDonald, owner of the Cross-Eyed Moose, is now cleaning up debris outside of his warehouse. He and Scott say they can handle a bit of damage and are relieved no one was injured.

"Maybe it's a Godsend," Scott said. "There wasn’t anyone on the sidewalk. Nobody driving down the street when the tin hit the street. There’s blessings. We just gotta look for them."