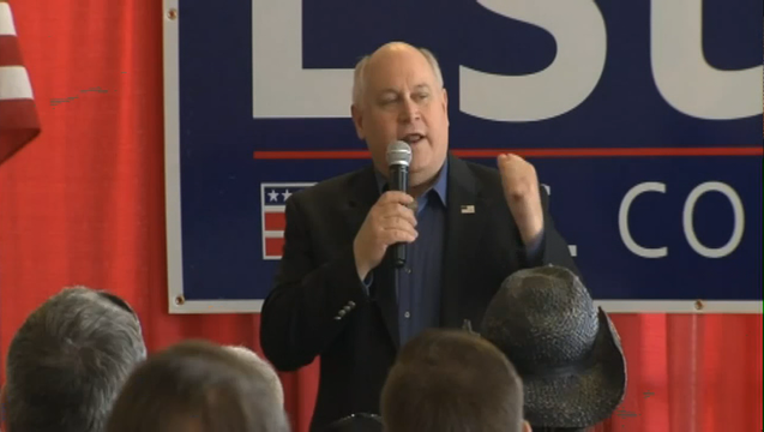 WICHITA, Kan. (AP) - Republicans survived an election scare on Tuesday and won a Kansas House seat in the first congressional election since President Donald Trump's victory, but the margin was much closer than expected in a district that had voted overwhelmingly for Trump in November.

"Republicans nationally should be very worried," said Bob Beatty, a Washburn University political scientist. "It's remarkable that Thompson got this close."

The Kansas election was the first of four special elections to fill seats in the House of Representatives - where Republicans now hold a 237-193 majority- to replace Republicans who took top jobs in the Trump administration. Others are in Georgia, Montana and South Carolina.

Both parties will now turn their attention to Georgia and the extremely competitive April 18 contest to replace Tom Price, who resigned to serve as Trump's Health and Human Services secretary.

Democratic hopes rest with Jon Ossoff, 30, a former congressional staffer turned investigative filmmaker who has raised more than $8 million, an extraordinary amount for a special election. Ossoff is counting on opposition to Trump to propel him to a decisive victory.

Thompson tapped into voter frustration after Brownback made Kansas a laboratory for sweeping tax cuts that left the state short of revenue and facing a budget crisis. Brownback also refused to expand the Medicaid health program for the poor.

Lucy Jones-Phillips, a 31-year-old insurance representative and Democrat, acknowledged she doesn't vote in every election, but said she voted for Thompson because she wanted to register her disappointment in Brownback, especially his veto of an expansion of Medicaid.

"I can't stand Brownback," she said as she left her polling site in Belle Plaine.

In a sign of nervousness in the waning days of the campaign, Republicans poured money into the race to bolster Estes. Republicans pulled in U.S. Sen. Ted Cruz of Texas to campaign in Wichita for Estes, and both Vice President Mike Pence and Trump recorded robo calls for him.

Those GOP calls prompted Charlene Health, a 52-year-old homemaker and Republican in Belle Plaine, to cast a ballot for Estes.

"I wasn't even going to vote," she said as she left her polling site Tuesday morning. "I finally did. I realized this was important."

Republicans have represented the south-central Kansas district since 1994. The district has been hurt by the downturn in the agricultural economy and the loss of hundreds of well-paying, blue-collar jobs in aircraft manufacturing plants. The 17-county congressional district includes the state's largest city of Wichita, home to Koch Industries, the company led by conservative billionaire political donors Charles and David Koch.

Estes said in his victory speech Tuesday night that his campaign showed political pundits and national media that they were wrong in suggesting he could lose the race.

Thompson, 46, a political newcomer backed by a group aligned with Sen. Bernie Sanders' 2016 presidential campaign, said late Tuesday that he will run for the seat again in 2018.

"We came a lot closer than everyone thought we were going to be at the beginning of the race, because from the very beginning people wrote us off as having absolutely no shot," Thompson's spokesman Chris Pumpelly said.

Libertarian Chris Rockhold trailed a distant third in the race.