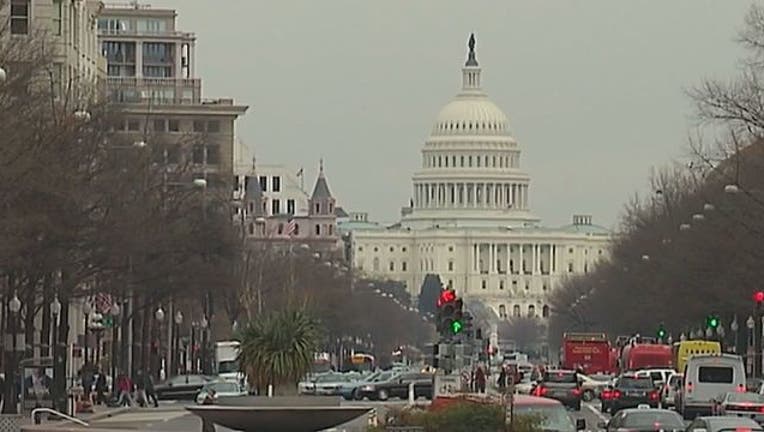 A report released Monday suggests Democrats might have to temper their enthusiasm about climbing back to power during this year's midterm elections.

To win a majority in the U.S. House of Representatives, Democrats would need a tremendous electoral wave not seen in more than 40 years to overcome Republican advantages from gerrymandered districts in key states, according to an analysis from the Brennan Center for Justice .

The report projects that Democrats would need to win the national popular vote for congressional districts by a nearly 11 percentage point margin over Republicans to gain more than the roughly two dozen seats they need to flip control of the Republican-led chamber.

That would take more than the typical Democratic wave that history suggests would occur for the party out of power during a midterm election.

"It would be the equivalent of a tsunami," said Michael Li, a senior counsel who heads up redistricting work for the center, which is based at New York University School of Law. "Democrats would have to win larger than any sort of recent midterm wave - almost double what they got in 2006 - in order to win a narrow majority."

The Brennan Center opposes what it calls "extreme gerrymandering" in which political parties draw legislative districts that virtually ensure they will hold on to power.

The center has filed a court brief in a case to be heard Wednesday by the U.S. Supreme Court supporting a lawsuit by Republicans alleging that Maryland's former Democratic governor and legislature unconstitutionally gerrymandered a congressional district to their advantage.

It also has filed court briefs supporting Democratic lawsuits alleging unconstitutional partisan gerrymandering by Republicans in states such as Wisconsin and Pennsylvania.

The center's analysis notes that Democrats gained 31 seats when they won the national congressional vote by 5.4 percentage points in 2006. Yet under the current districts, which were redrawn after the 2010 Census under GOP control of many state capitols, a similar national victory margin in the November election is projected to net Democrats only about a dozen new seats.

The report projects that a 10 percentage point national margin would gain 21 seats for Democrats - still shy of the 23 or 24 needed to claim a House majority. An 11-point margin is projected to gain 28 seats for Democrats, but they haven't achieved such a large midterm victory since a nearly 14 point margin gained them 49 seats in 1974.

"Even a strong blue wave would crash against a wall of gerrymandered maps," the Brennan Center report says.

The analysis is based on an assumption that as a political party increases its share of the statewide vote, it will see a similar percentage increase in most congressional districts. The report does not account for particular factors at play this year in each district, such as whether incumbents are retiring or whether voter demographics have shifted.

Former U.S. Attorney General Eric Holder, who is chairman of the National Democratic Redistricting Committee, said in a statement that the Brennan Center report "makes clear that Republican gerrymandering has undermined the voting power of Americans and threatens our democracy."

Matt Walter, president of the Republican State Leadership Committee, dismissed it as part of a liberal narrative to diminish previous Republican victories and boost Democratic chances.

"As called for by the Constitution, map-drawing is a political process left to the authority of state legislatures, and this so-called study is another attempt by Democrats to undermine that process and replace it with liberal courts, or cherry-picked experts from liberal faculty rooms to draw maps that rig the system for Democrats," Walter said in a statement.

The report says that for Democrats to achieve an 11 percentage point national victory margin, they would need to increase their vote share by at least 7 percentage points over their 2016 totals in about a dozen states where Republicans generally had fared well, including Texas and Ohio.

Democrats also would need more modest gains in traditional Democratic strongholds such as California and Illinois.