The Boston Red Sox were stripped of their second-round pick in this year’s amateur draft by Major League Baseball for sign stealing in 2018 and former manager Alex Cora was suspended through the 2020 postseason for his previous conduct as bench coach with the Houston Astros.

Manfred found Boston’s conduct far less egregious than that of the Astros, whom he determined used video to steal catchers’ signs during their run to the 2017 World Series title and again during the 2018 season.

The Boston Red Sox were stripped of their second-round pick in this year’s amateur draft by Major League Baseball for sign stealing in 2018.

Manager AJ Hinch and general manager Jeff Luhnow were suspended through the 2020 postseason on Jan,. 13 and Houston was fined $5 million, the maximum under the Major League Constitution. The Astros were penalized their next two first- and second-round amateur draft picks.

“Unlike the Houston Astros' 2017 conduct, in which players communicated to the batter from the dugout area in real time the precise type of pitch about to be thrown, Watkins' conduct, by its very nature, was far more limited in scope and impact,” Manfred wrote. “The information was only relevant when the Red Sox had a runner on second base (which was 19.7% of plate appearances league-wide in 2018), and Watkins communicated sign sequences in a manner that indicated that he had decoded them from the in-game feed in only a small percentage of those occurrences.”

The major league season is on hold because of the coronavirus pandemic. Spring training was halted in March and opening day has been postponed at least until mid-May. 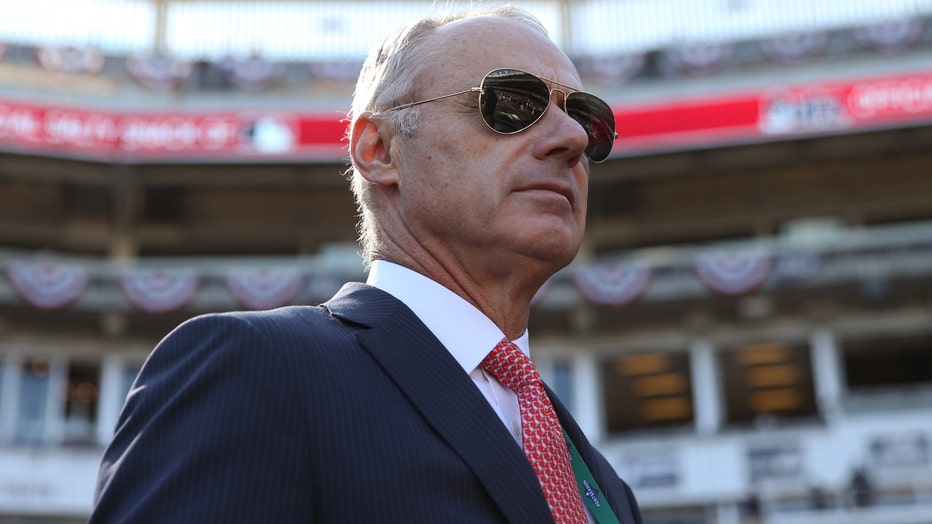 BRONX, NY - OCTOBER 15: Major League Baseball Commissioner Robert D. Manfred looks on prior to Game 3 of the ALCS between the Houston Astros and the New York Yankees at Yankee Stadium on Tuesday, October 15, 2019 in the Bronx borough of New York City

Manfred called Watkins, a former minor league player, a “key participant” in the 2017 Apple incident, when the Red Sox used a smartwatch to relay decoded signs from the replay room to the dugout.

Manfred said Cora did not know and had no reason to know of Watkins’ conduct. Cora left Houston after the 2017 season and managed the Red Sox to the 2018 title.

Fallout from the January penalties caused Cora and newly hired New York Mets manager Carlos Beltrán to lose their jobs. Cora and Beltrán, the senior player on the 2017 Astros, were the key individuals in a scheme to place a camera near Houston's dugout and have players bang on a trash can to signal breaking pitches.

“MLB acknowledged the front office’s extensive efforts to communicate and enforce the rules and concluded that Alex Cora, the coaching staff, and most of the players did not engage in, nor were they aware of, any violations," Red Sox president Sam Kennedy said in a statement. “Regardless, these rule violations are unacceptable. We apologize to our fans and Major League Baseball.”