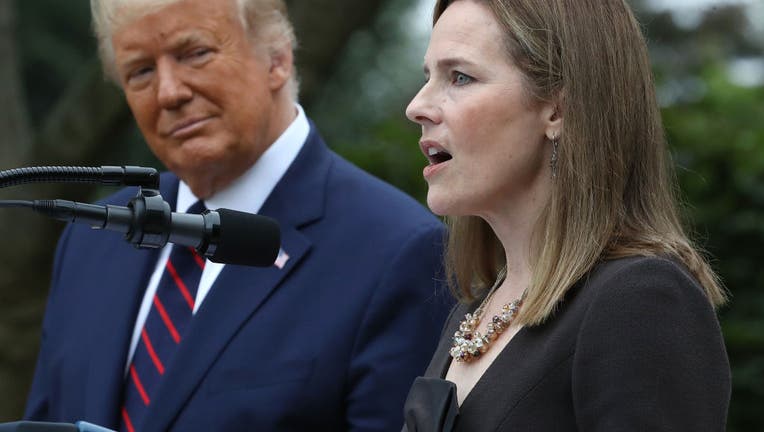 WASHINGTON, DC - SEPTEMBER 26: Seventh U.S. Circuit Court Judge Amy Coney Barrett speaks after U.S. President Donald Trump announced that she will be his nominee to the Supreme Court in the Rose Garden at the White House September 26, 2020 in Washing

Joe Biden, Democratic Presidential Nominee, said, " Election Day is just weeks away, and millions of Americans are already voting because the stakes in this election could not be higher. They feel the urgency of this choice – an urgency made all the more acute by what’s at stake at the U.S. Supreme Court."

"President Trump has been trying to throw out the Affordable Care Act for four years. Republicans have been trying to end it for a decade. Twice, the U.S. Supreme Court upheld the law as constitutional."

"But even now, in the midst of a global health pandemic, the Trump Administration is asking the U.S. Supreme Court to overturn the entire law, including its protections for people with pre-existing conditions. If President Trump has his way, complications from COVID-19, like lung scarring and heart damage, could become the next deniable pre-existing condition."

"The American people know the U.S. Supreme Court decisions affect their everyday lives. The United States Constitution was designed to give the voters one chance to have their voice heard on who serves on the Court. That moment is now and their voice should be heard. The Senate should not act on this vacancy until after the American people select their next president and the next Congress."

Texas Governor Greg Abbott shared his approval for Trump's Supreme Court nominee, "Judge Amy Coney Barrett is a remarkable individual who will make an outstanding Supreme Court Justice. Her proven legal brilliance is matched by her exceptional character and unflinching commitment to the U.S. Constitution. The Senate should swiftly confirm Judge Amy Coney Barrett to the United States Supreme Court just as it recently confirmed her to the 7th Circuit Court of Appeals."

That sentiment was echoed by Texas Attorney General Ken Paxton, “President Trump made an exceptional selection in nominating Judge Amy Coney Barrett for the United States Supreme Court. Judge Barrett, who currently serves on the United States Court of Appeals for the Seventh Circuit, has extensive experience in the Supreme Court’s work as a clerk for the late Justice Antonin Scalia and as a law professor at the University of Notre Dame, where she was named ‘distinguished professor of the year’ three times. She has also written nearly 100 opinions in an impressive judicial track record that demonstrates superb temperament, judicial restraint, and a firm commitment to following the rule of law and upholding the Constitution. Judge Barrett will make an outstanding addition to the Supreme Court.”

Texas Senator Ted Cruz shared his appreciation for Barrett as well, "Judge Amy Coney Barrett currently serves on the U.S. Circuit Court of Appeals for the Seventh Circuit with honor and distinction, and I look forward to supporting her nomination to the Supreme Court of the United States. Before her confirmation to the Seventh Circuit, Judge Barrett was a respected academic and award-winning professor at the University of Notre Dame Law School, where she continues to teach. Judge Barrett clerked for Judge Laurence Silberman of the U.S. Court of Appeals for the D.C. Circuit and the late Supreme Court Justice Antonin Scalia."

"Though Judge Barrett’s credentials are impeccable, I have no doubt Senate Democrats will try to destroy her reputation for political gain, because they already tried to do just that. In 2017, when she was nominated to the Seventh Circuit, my Democratic colleagues on the Senate Judiciary Committee interrogated Judge Barrett not for her record or her qualifications, but for her faith. It was a shameful exercise of religious bigotry, the likes of which should have long ago been relegated to the history books."

"Judge Barrett is well-qualified to serve on the United States Supreme Court. Having confirmed her to the circuit court in 2017 with bipartisan support, the Senate has already undertaken a thorough and rigorous review of her record. Let me be clear: Democrats’ expected attempts to derail this process, along with their contempt for Judge Barrett and her faith, will not impede this nomination."

"I look forward to her confirmation hearing, where Judge Barrett will have the opportunity to demonstrate to the Judiciary Committee, the Senate, and the American people that she will uphold the rule of law and interpret the Constitution according to its original meaning without fear or favor. In 2016, President Trump promised to nominate judges in the mold of Justices Scalia and Clarence Thomas. The American people elected him president and expanded the Senate Republicans’ majority in 2018 because we’ve delivered on that promise. I have every confidence she will be confirmed before Election Day.”

Texas Senator John Cornyn shared his agreement in the pick by President Trump. "Judge Amy Coney Barrett is a legal trailblazer with a deep respect for the law and our nation’s founding principles. Throughout her impressive career, Judge Barrett has maintained the importance of an independent judiciary that interprets the law and Constitution as-written, and operates free from political pressure."

"Judge Barrett has impressed the brightest judicial and legal minds with her profound understanding of the law. During the confirmation process for her current position, Judge Barrett proved she has not only the legal expertise, but also the proper temperament and character to serve on the high court."

"The Senate will begin a thorough review of Judge Barrett’s nomination, a process that should not be rushed. Despite previous attacks based on Judge Barrett’s religious faith, I hope Democrats choose not to engage in another character assassination, as they did against Justice Kavanaugh. I look forward to meeting with Judge Barrett in the coming days as the Judiciary Committee prepares for her confirmation hearing.”