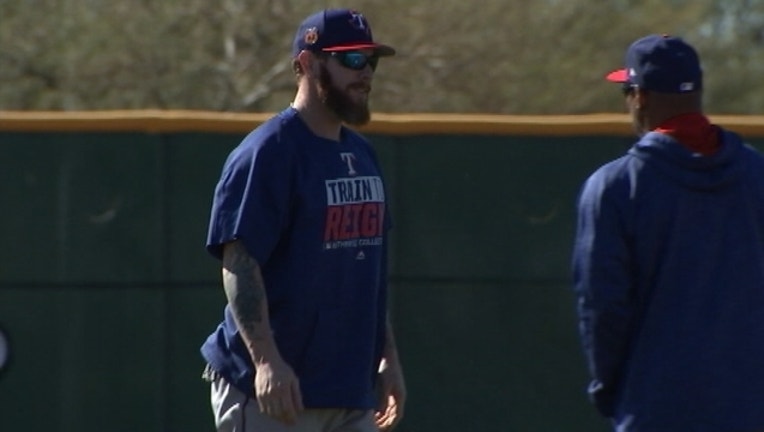 ARLINGTON, Texas (AP) - Josh Hamilton has yet another knee injury, and this one could mean the end his career.

The Texas Rangers released of the 2010 AL MVP from his minor league contract Friday, saying he injured his right knee in Houston while working his way back from left knee surgery.

Hamilton, who turns 36 next month, underwent reconstructive surgery on his left knee last June and left the team during spring training for another procedure after experiencing soreness.

The surgery during spring training was the 11th of Hamilton's career and third since the five-time All-Star last played in the majors in 2015. Now he will need No. 12, after which Hamilton said he will "evaluate the situation."

"I am disappointed but not discouraged that my knee problems have not allowed me to play this season," Hamilton said.

While general manager Jon Daniels said he wasn't sure on details of the upcoming surgery, he said it was significant and that Hamilton wouldn't be able to play this season. And Daniels didn't sound optimistic about Hamilton playing again.

"I think with the number of knee surgeries he's had - I'm not a doctor - but the odds are pretty challenging to overcome," Daniels said. "That being said, he's overcome a lot of odds in his life."

Hamilton was the No. 1 overall pick out of high school by Tampa Bay in 1999. His career was almost derailed by drug and alcohol addiction before he made his big league debut with Cincinnati in 2007.

The left-handed slugger joined the Rangers in an offseason trade, starting his five-year All-Star run in 2008. The stretch included 142 home runs, 506 RBIs and the only two World Series trips in club history in 2010-11.

"I was a little younger, being able to watch him, seemed like he hit a homer every at-bat he was up or he did something pretty spectacular," said Mike Napoli, back with Texas after spending 2011 and 2012 with Hamilton. "I'll never forget those times where he put up the impressive numbers and helped us win as a team."

Hamilton signed a $125 million, five-year contract with the Los Angeles Angels ahead of the 2013 season, then started his injury-plagued decline. He came back to Texas in a trade two years ago.

This is the final year of his major league contract, and the Angels are paying the Rangers $22 million, which covers most of the $24 million Hamilton is due. His minor league contract called for a $20,000 monthly salary.

Hamilton led the AL with 130 RBIs in 2008, his first full season in the majors, and hit a league-leading .359 with 32 homers and 100 RBIs when he won the MVP and the Rangers reached the World Series for the first time in 2010. Texas lost to San Francisco in five games.

Asked for his favorite memory of Hamilton, Daniels recalled the go-ahead homer the lefty slugger hit in St. Louis in the 10th inning of Game 6 of the 2011 World Series. The Rangers were a strike away from the title twice in that game before losing in 11 innings and dropping Game 7 as well.

Hamilton dazzled the crowd at the old Yankee Stadium with a record showing in the All-Star home run derby in 2008, and he's the last player to hit four homers in a major league game. He did it May 8, 2012, at Baltimore.

"He has a pretty good case to be the most talented guy to come through here," Daniels said. "Batting title, RBI title, the home run derby, ALCS MVP, was nearly a World Series-winning home run there in the 10th inning in St. Louis, highlight catches, throws. He did a little bit of everything."

"What's his legacy?" Daniels said. "I think other people will figure that out. But I'm going to think of him as an unbelievably gifted, talented player that achieved his potential on the field with us."