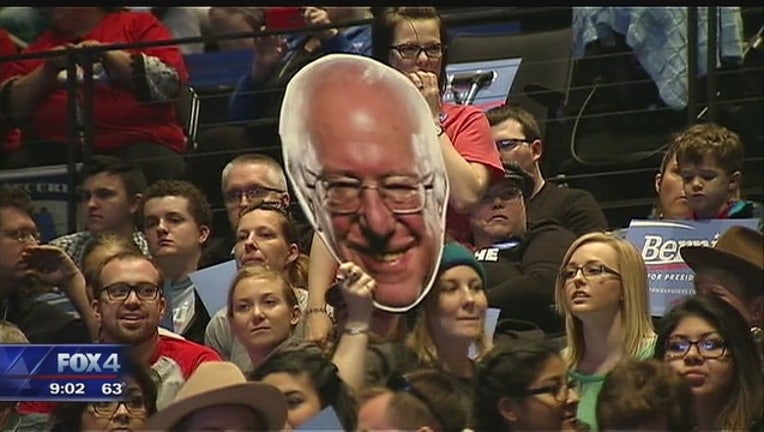 WASHINGTON (AP) — Trailing significantly in the Democratic primaries, Bernie Sanders wants superdelegates to flip his way and is aiming for a contested national convention in July against front-runner Hillary Clinton. For his plan to work, he'll need plenty of big-time breaks.

Sanders says he will campaign until the final primary in the District of Columbia in mid-June and aim to amass as many delegates as possible to influence the platform at the party's convention in Philadelphia.

The Vermont senator faces a daunting deficit against Clinton among pledged delegates from primaries and caucuses as well as among superdelegates, the Democratic elected and party leaders who can support the candidate of their choice and account for 30 percent of the 2,383 delegates needed to win.

Some questions and answers about Sanders' longshot odds for the Democratic nomination:

Clinton leads Sanders among pledged delegates from primaries and caucuses, 1,645 to 1,318, according to an analysis by The Associated Press. Among superdelegates, Clinton leads 520 to 39.

That means overall, Clinton holds a lead of 2,165 to 1,357, putting the former secretary of state 91 percent of the way to clinching the nomination.

Clinton also has an edge of roughly 3 million raw votes. Clinton has received more than 12.2 million votes in primaries and caucuses to date, compared with 9.1 million for Sanders. Those numbers do not include Iowa, Nevada, Maine, Alaska, Washington and Wyoming — caucus states where AP tabulated delegate equivalents, not raw votes. Sanders won four of those six states.

HOW CLOSE IS CLINTON TO CLINCHING?

Clinton is still a few weeks away.

She remains 218 delegates short. The election contests in May offer a total of 235 delegates, including states such as Oregon, where Sanders believes he can do well. Democrats award delegates in proportion to the share of the vote, so even the loser gets some. That means Clinton won't be able to win all 235 from May.

More likely, she'll split the delegates more evenly with Sanders, putting her on track to reach 2,383 in early June.

That date could move up sooner if Clinton does better than expected in the May contests and picks up many more superdelegate endorsements.

WHAT ARE SANDERS' ODDS?

When including superdelegates, Sanders would need to win more than 82 percent of the remaining delegates and uncommitted superdelegates. That's all but impossible — Clinton would basically have to lose every remaining state with 20 percent or less of the vote. So far, Sanders has been able to achieve that only in three small, less diverse caucus states: Alaska, Utah and his home state of Vermont.

Sanders would need a solid victory in Indiana on Tuesday, then put together a winning streak in West Virginia on May 10, Kentucky and Oregon on May 17 and Puerto Rico on June 5. On June 7, Sanders needs a big delegate haul in California, the nation's largest state, and in contests held that day in Montana, New Jersey, New Mexico, North Dakota and South Dakota. The final primary is in the District of Columbia on June 14.

WHY DOES SANDERS SAY HE CAN WIN?

He's mostly focusing on the pledged delegates won just from primaries and caucuses. He trails significantly with those delegates, but not by as much as when including superdelegates.

To overtake her in those delegates, Sanders would need to win 65 percent of those remaining. That would require sweeping victories by Sanders in coming states large and small including delegate-rich California, where Clinton holds a small lead in polling.

If Sanders overtakes Clinton in the pledged count, he would still need to win support from at least half of the 714 superdelegates who get a vote at the national convention to reach 2,383. Currently, he has endorsements from 39, or about 5 percent.

WILL SUPERDELEGATES FLIP THEIR SUPPORT?

Barring a major Clinton loss in Indiana, it's mathematically impossible for Sanders to clinch the nomination outright without earning the support of these party officials. So Sanders is banking on hundreds of superdelegates to change their public support from Clinton to him.

In 2008, when Clinton waged a lengthy primary battle against then Illinois Sen. Barack Obama, the future president was able to persuade dozens of superdelegates to come to his side. But there was a big difference: Obama had the lead among delegates from primaries and caucuses for much of the 2008 race.

Sanders says superdelegates should honor the will of the voters in their states. He's going after superdelegates who are supporting Clinton in states he's won — for instance in Minnesota, Sens. Amy Klobuchar and Al Franken and Gov. Mark Dayton; and in Washington state, Sens. Patty Murray and Maria Cantwell — to switch their support.

But by that logic, some of Sanders' faithful, including Reps. Raul Grijalva of Arizona and Alan Grayson of Florida, might need to back Clinton because she won their congressional districts.

IF SUPERDELEGATES IN STATES HE WON SUPPORTED HIM, WOULD SANDERS LEAD?

By either calculation, Sanders would still trail Clinton in the total delegate count.

It would, however, garner Sanders additional delegates, which could help him influence Clinton's platform at the convention in July.