The president touched on many issues that appeal to conservative Texas, including the second amendment and illegal immigration. He spoke for about 90 minutes and addressed controversies like the troop pullout in Syria and the House Democrats impeachment inquiry.

DALLAS - President Donald Trump had a busy itinerary Thursday on his one-day sweep through North Texas before ending at a capacity-filled campaign rally at the American Airlines Center in Dallas.

In a marathon campaign rally at the AAC with approximately 20,000 people, the president touched on many issues that appeal to conservative Texas, including the second amendment and illegal immigration. He spoke for about 90 minutes and addressed controversies like the troop pullout in Syria and the House Democrats impeachment inquiry.

The president hit some of his standard topics as well as current events. Much of it geared at a largely Texan audience that could play a major role in 2020.

While Mr. Trump was on the campaign trail, an impeachment inquiry back in Washington in the Democrat-led House is underway. But instead of shying away, Trump used the inquiry to rile supporters up. 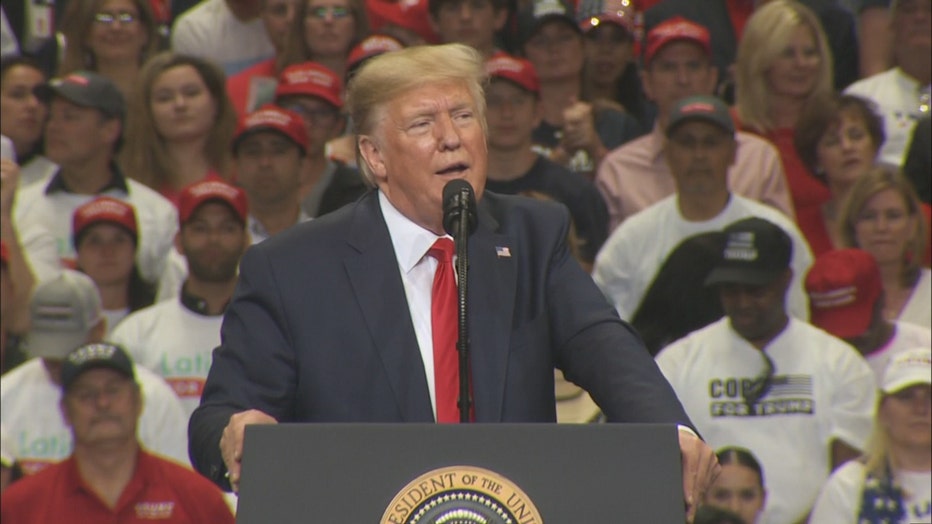 Trump touted the ceasefire Turkey agreed to in Syria brokered by Vice President Mike Pence. He called his decision to pull U.S. troops out of northern Syria “unconventional and tough love."

"Sometimes you have to let them fight,” Trump said. “It's like two kids in a lot. You got to let them fought and then you pull them apart.”

The rally was not limited to national controversies. With illegal immigration, the economy and second amendment rights key issues for Texas Conservatives, the president stoked fear about what Democrats could do with more power.

“They want to take your guns away, and they want to install far-left judges to shred our constitution. It’s not happening,” he said.

The president won Texas by nine points in 2016. But Democrats say recent elections show a shift left and hope to flip the state.

Campaign staffers say they are not worried.

“We believe Texas is a Trump state, first and foremost. We know Democrats are going to try to make an effortless play for Texas,” said Kayleigh McEnany, a campaign spokesperson. “It’s not going to work. In fact, bring their resources here because we’re confident this is going to be a Trump state.”

Regardless of whether the state is in danger of flipping, the state provides vital fundraising and volunteer support for the president.

The president says Texas backs him.

“Donald Trump is not going to lose Texas, I can tell you that,” he said. “And Texas is not in play.”

There were small groups of protestors outside the rally, but there weren’t any significant exchanges between them and police or Trump supporters.

Dallas police say one person who was armed was arrested, but he was also referred for a mental health evaluation.

There were a couple thousands of Trump supporters outside on the plaza who couldn’t make it inside the AAC.

Tens of thousands of Trump supporters funneled into Victory Park, pushing their way to the plaza and waiting for hours. Some of them even camped overnight to be able to cheer and jeer with the president.

Those leaving the AAC talked about how electric the rally was inside. Supporters say they want the rest of the country to see that Texans support him.

At least one person was arrested. Dallas police say around 6:30 officers noticed a man wearing body armor and realized he was carrying a weapon. He did have a license to carry, but he was taken into custody and taken to a hospital for a mental evaluation.

There were small groups of protestors outside the rally, but there weren’t any significant exchanges between them and police or Trump supporters.

Earlier in the day, Air Force One touched down at the Naval Air Station Joint Reserve Base in Fort Worth around noon. It was filled with politicians and local leaders ready to greet the president.

There were also some very excited fans of President Trump. Supporters went through tight security and several checkpoints to get a glimpse of him.

"I think it’s amazing,” said supporter Natalie Rawlins. “It's a once in a lifetime thing to see the president and to see our President Trump."

There were spectators of all ages, Gov. Gregg Abbott, Fort Worth Mayor Betsy Price and, of course, some faithful Trump supporters.

Air Force One touched down at the Naval Air Station Joint Reserve Base in Fort Worth around noon. It was filled with politicians and local leaders ready to greet the president.

Once President Trump got off the plane with his traveling press corps, he greeted some of his supporters.

Glynis Chester, with Women for Trump, got a personal handshake and hug.

“There's a real myth out there that suburban women don't support him,” she said. “This is an example. There's 40 of us here today."

The president not only signed autographs, but he left the crowd with a few presidential tokens.

It was only a few moments in a busy day for the president, but it was an experience his supporters will never forget.

Before the massive rally, President Trump attended a ribbon-cutting for a new Louis Vuitton workshop in Johnson County near the city of Keene.

President Trump toured the 256-acre facility with his daughter Ivanka and son-in-law Jared Kushner. He celebrated the high fashion company and its newest plant in rural North Texas.

The people who live and work nearby say Trump’s stop has been the talk of the town for weeks.

Louis Vuitton, known for its luxury leather goods, signed President Trump’s ‘pledge to American workers.’ The French company committed to the creation of approximately 1,000 new jobs in the U.S.  over the next five years. They will also offer a training program for applicants who lack the needed skills to get hired. All leather goods made at the facility will have a “Made in America’ label attached.

More than 150 Texas artisans have been hired so far. Many of them are living and spending in nearby Keene.

Shortly after arriving in North Texas, President Trump attended a ribbon-cutting for a new Louis Vuitton workshop in Johnson County near the city of Keene.

“I’ve seen some influx of people come,” said Dean Waterman, owner of Keene City Station. “They come to travel to check the layout as they’re building the factory and getting everything ready, and they come in here. And that gives opportunity for Keene to grow.”

Keene residents lined the main drag with American flags. They say it was a symbolic thank you to the president and a Parisian company for making an investment in small town America.

The Chamber of Commerce in Keene hopes the success of the Louis Vuitton facility will encourage other companies to build there too.

To combat Trump's visit, presidential candidate Beto O’Rourke held a 'Rally Against Fear' in Grand Prairie. He said he wants his supporters to stand up to hatred, racism and intolerance.