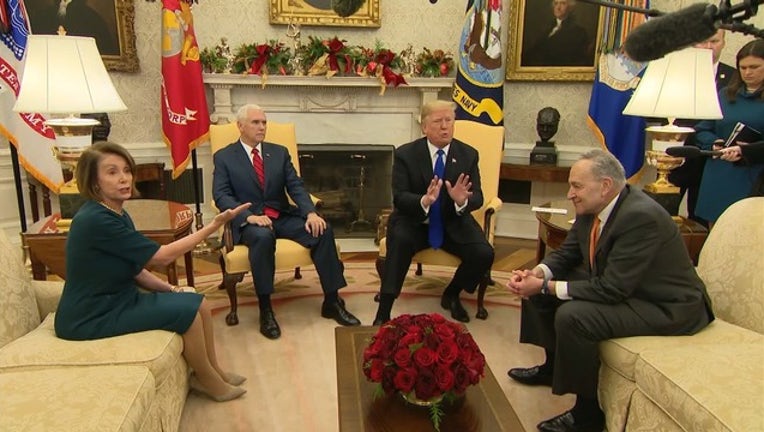 WASHINGTON (AP) - Arguing heatedly in public with Democratic leaders, President Donald Trump threatened repeatedly on Tuesday to shut down the government if Congress doesn't provide the money he says is needed to build a wall at the Mexican border. He insisted the military can build it if Democrats won't vote for the funding.

Trump's comments came as he opened a contentious meeting with Democratic Senate and House leaders Chuck Schumer and Nancy Pelosi, with the government looking at a possible partial shutdown on Dec. 21 when funding for some agencies will expire.

Schumer and Pelosi both said legislation to keep the government open and provide additional border security could pass both houses of Congress, but Trump said major wall funding was necessary.

"Yes, if we don't get what we want ... I will shut down the government," he declared.

Constantly interrupting, Trump squabbled with the Democrats over whether wall funding could be approved in the House or Senate without Democratic votes.

"This has spiraled downwards," Pelosi said.

The president asked whether Republicans had won the Senate in the November election.

"When the president brags he has won North Dakota and Indiana, he's in real trouble," retorted Schumer with a smile.