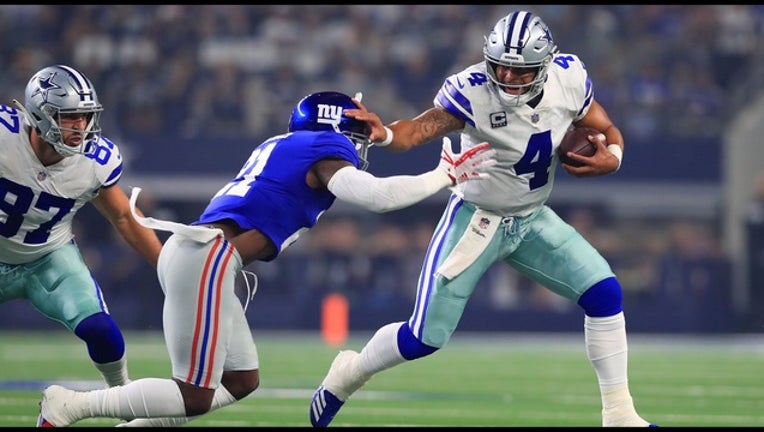 Landon Collins #21 of the New York Giants tries to grab Dak Prescott #4 of the Dallas Cowboys in the first quarter of a football game at AT&T Stadium on September 16, 2018 in Arlington, Texas. (Photo by Tom Pennington/Getty Images)

The Dallas quarterback threw a 64-yard touchdown pass to Tavon Austin on the third play of the game and the Cowboys sacked Eli Manning six times in a 20-13 victory over the New York Giants on Sunday night.

The Dallas defense was strong again, just as in an opening loss at Carolina, as the Cowboys (1-1) avoided the first 0-2 start in seven seasons under coach Jason Garrett.

Manning and the Giants have started 0-2 for the fifth time in the past six seasons.

After saying "challenge accepted" during the week to Giants safety Landon Collins' suggestion that New York had a better chance by forcing Prescott to throw, the 2016 NFL Offensive Rookie of the Year hit Austin in stride behind cornerback Janoris Jenkins. The speedy receiver cut back to his right before trotting across the goal line at an angle.

"We definitely hear that," Prescott said. "I kind of said the challenge accepted, I said I accepted it. But I can tell you I wasn't the only one who accepted that challenge. This team accepted it. That offense accepted it. We wanted to go out there and just show you guys."

Dallas running back Ezekiel Elliott outgained Saquon Barkley in the first meeting in the pros between the former college rivals and high NFL draft picks. Elliott, who starred at Ohio State, rushed for 78 yards with a touchdown. Barkley, from Penn State, had just 28.

Even Prescott outrushed Barkley, finishing with a career-high 45 yards on the ground while throwing for 160.

Brett Maher had the first two field goals of his NFL career, including a 29-yarder after Damien Wilson forced a fumble on a sack of Manning and Taco Charlton recovered.

"He's been in this league for a long time, he can read defenses, and to shake him up a little bit is always good," Crawford said.

The Giants had questions with the offensive front, and they'll only grow after Manning finished two sacks shy of the most in his career. New York also lost center Jon Halapio, who was carted off with an air cast on his right leg in the third quarter.

Manning converted a pair of fourth downs on sneaks, but the sacks helped keep the Giants from converting those into points. He was even hammered when he wasn't behind the line of scrimmage - on a hit by linebacker Jaylon Smith on a 1-yard gain before New York's first points on Aldrick Rosas' 28-yard field goal late in the third quarter.

"Eli's confident," coach Pat Shurmur said. "He's a pro and he battled throughout the game and I thought he did a good job. I sense confidence, yes."

Prescott fooled the New York defense several times with fake handoffs to Elliott on keepers around end. The longest was a 15-yarder on Dallas' second possession, leading to Maher's first NFL field goal from 37 yards.

For the second straight week, the Giants didn't get a touchdown until the fourth quarter. New York made it interesting when Michael Thomas recovered an onside kick after Manning's 18-yard scoring pass to Evan Engram with 1:27 remaining.

The Giants settled for Rosas' 38-yard field goal to get within a touchdown with 11 seconds remaining, but the next onside kick went out of bounds.

Manning finished 33 of 44 for 279 yards. Austin had two catches and led Dallas with 79 yards receiving.

Although Barkley was stifled in the running game, he led everybody with 14 catches for 80 yards. Odell Beckham Jr. had four grabs for 51 yards. Engram added seven for 67. "They just did a good job just getting some pressure and not getting a whole lot of time to get the ball down the field," Manning said.

The quick strike in the passing game still didn't make life very easy on Elliott. He struggled to find much room outside of a 19-yarder on the second scoring drive. The touchdown was a churning 6-yard run for a 20-3 lead with 5:45 remaining.

Dallas tight end Rico Gathers was active for the first time in his third NFL season. The former Baylor basketball player was open in the end zone on one play, but Prescott overthrew him when pressure came. Gathers was targeted twice without a catch.

Giants: Punt returner Kaelin Clay injured an ankle in the second quarter and didn't return. He had another adventurous moment a week after his late muff cost the Giants a chance to rally against Jacksonville. He was indecisive on a punt, which bounced in front of and straight into him. He hung on to the ball. ... Eli Apple was sidelined in the second half because of a groin injury.

Cowboys: LB Sean Lee was held out late with a sore hamstring, but coach Jason Garrett said he could have returned and should be fine next week.

Giants: Another Texas trip to Houston.