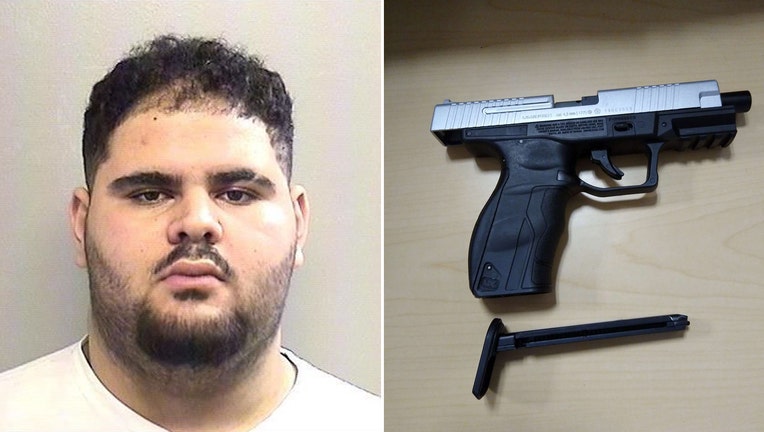 ARLINGTON, Texas - Police arrested an 18-year-old for waving around what appeared to be a handgun near Arlington High School on two different occasions.

Ibrahim Al Mafrachi was booked into the Arlington jail Wednesday and charged with two counts of exhibiting a firearm on a school campus or bus. His bond was set at $2,500 for each charge.

According to an arrest warrant affidavit, a man in a blue Honda sedan pulled into the school’s parking lot near the Multipurpose Activity Center on Nov. 7 and slowly drove around. Students said he displayed what looked like a handgun in his driver’s side window.

The campus was immediately placed on lockdown and police were called to investigate. By the time officers arrived the suspect had already driven away.

Then on Nov. 11, the same man in a blue Honda sedan was spotted in Arlington High School’s southeast parking lot waving around a “square silver handgun with a black handle.” Again the campus was placed on lockdown.

One student who saw the suspect told police she recognized him as a former classmate. Investigators were able to use a class roster to identify Al Mafrachi.

Police said Al Mafrachi, who dropped out of school last year, was seen leaving his home in a blue Honda sedan that matched the description of the one seen on the Arlington High School campus.

He is also a suspect in an aggravated robbery case where the victim said she was threatened with a silver and black handgun, the affidavit states.

When questioned about the incident, Al Mafrachi eventually admitted his role but told investigators the firearm is a pellet pistol, not a handgun.

Although the firearm is a replica, the arrest warrant affidavit states Al Marfrachi is facing felony charges because “Arlington High School students were alarmed and placed in imminent fear of their personal safety which resulted in “Lock-Down” protocol being initiated on two separate dates.”

The document does not give a motive for his alleged actions.